The Seniors had another heart-breaking result on the weekend against another top side. The match was neck and neck all day until Caulfield kicked 3 quick goals in the final term to win by 18 points. It was a valiant effort by the Wellers and every player gave it their all. It was a most exciting game to watch. Captain Ben Hart was a standout player for the Wellers and battled hard all day. Commiserations to the players, however it shows you all have what it takes to get some wins on the board in the remaining 7 games.

The Ressies had a game they would rather forget against a very polished Caulfield Reserves unit.

The Thirds broke their drought with a fantastic win over Kew. Well done to Macca and the boys!

Club Memberships
SeniorsRound 10’s great efforts against the undefeated Mazenod reassured our belief that we could match it with the best when we came to play. We had another massive challenge last weekend against Caulfield, who had outclassed us earlier in the year at their home ground.

It was evident from the outset that we were determined to give everything we had against a tough opposition. The tackling and pressure around the ball from Chris Young and Nick Latsas (in his 100th game) was fantastic and got us going early. Despite having a three goal lead midway through the first quarter, we allowed our opponents a few easy goals and went in at quarter time 4 goals each despite feeling we had the best of it.

An intense, fast paced game ensued with neither team able to break away from each other. Rob Deev was controlling the back half while Tom Kanz was lively up forward.

At three quarter time, we were a goal down and the game was on the line. We came out firing in the last quarter, getting out to a nine point lead thanks to some amazing contested aerial work from Robbie Campbelland run from Frazer Wells.

Alas, despite our best efforts, Caulfield had too much run in the dying stages of the game as they piled on a few quick goals in succession to go out victors by 18 point.

It was shattering to let another close game slip, but the improvement we have seen in both the team and individual players since the start of the season is hugely encouraging. If we stick together and work hard, the reward will come. 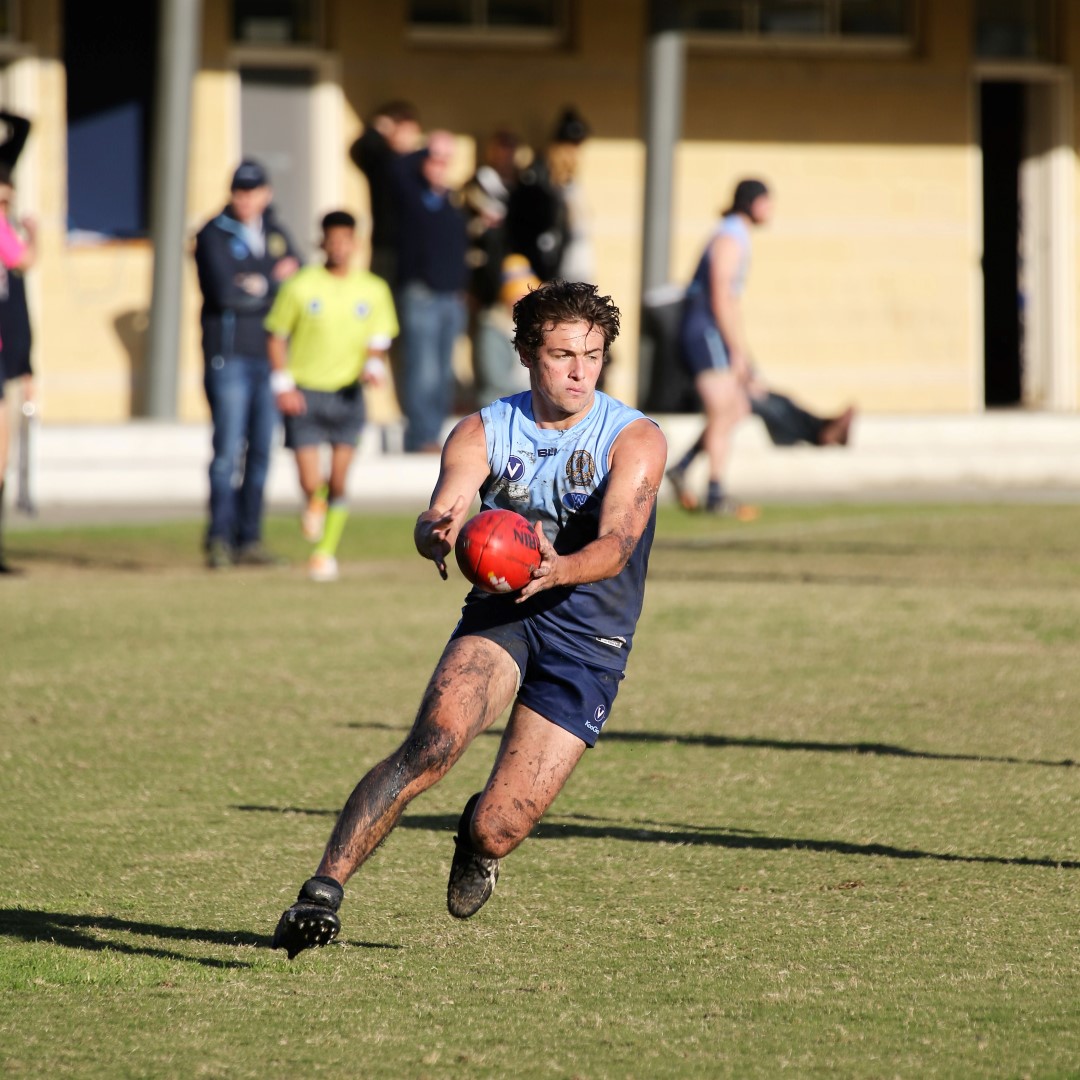 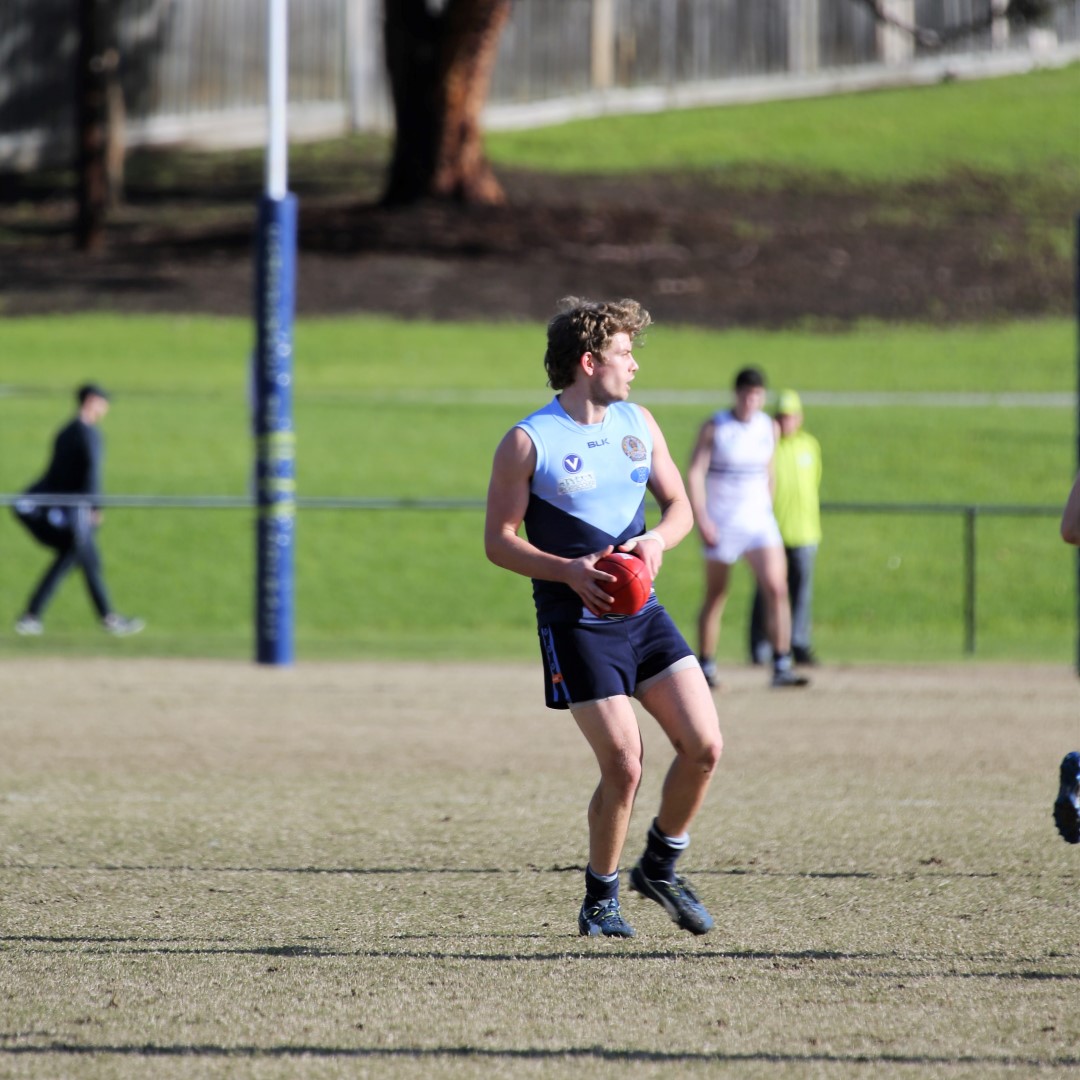 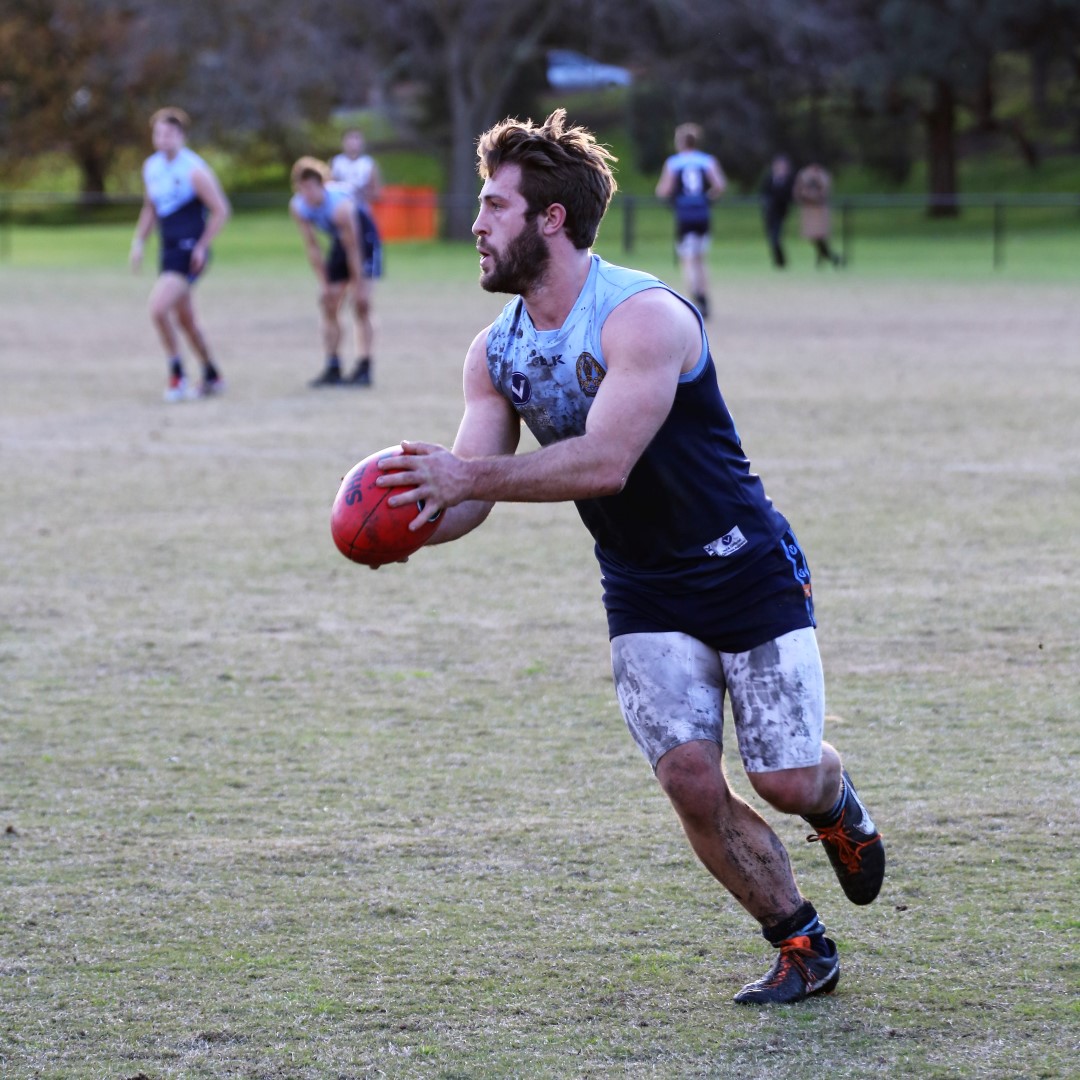 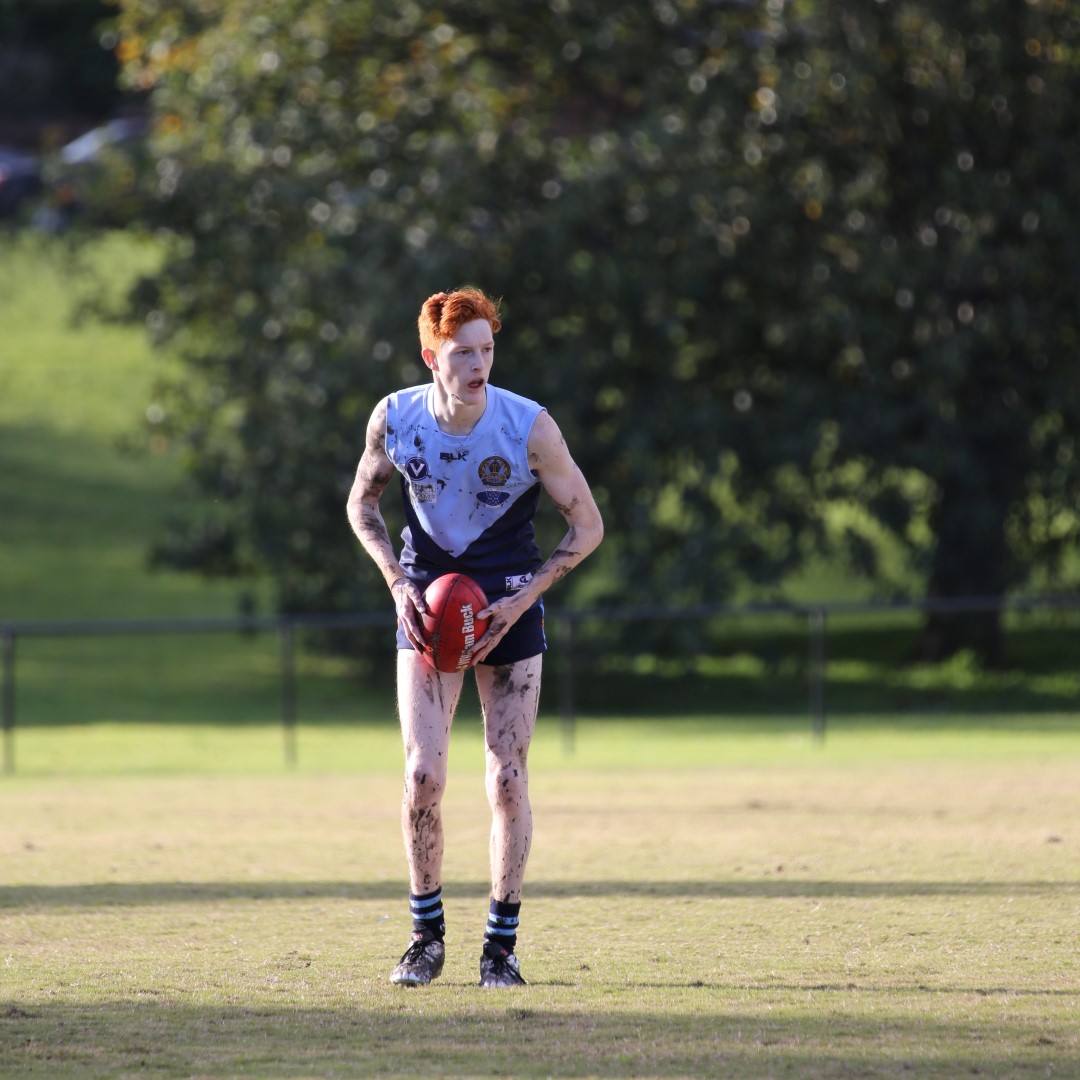 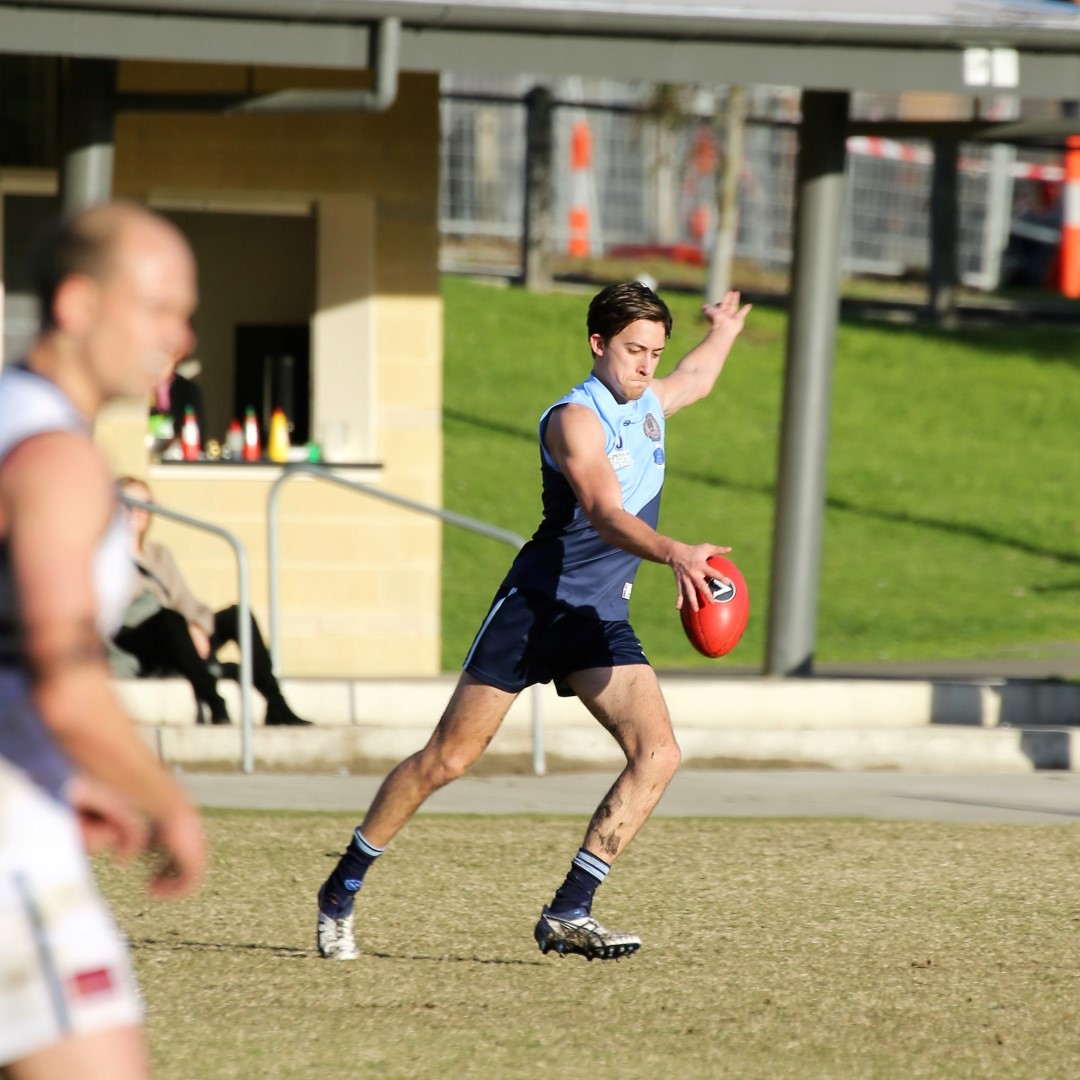 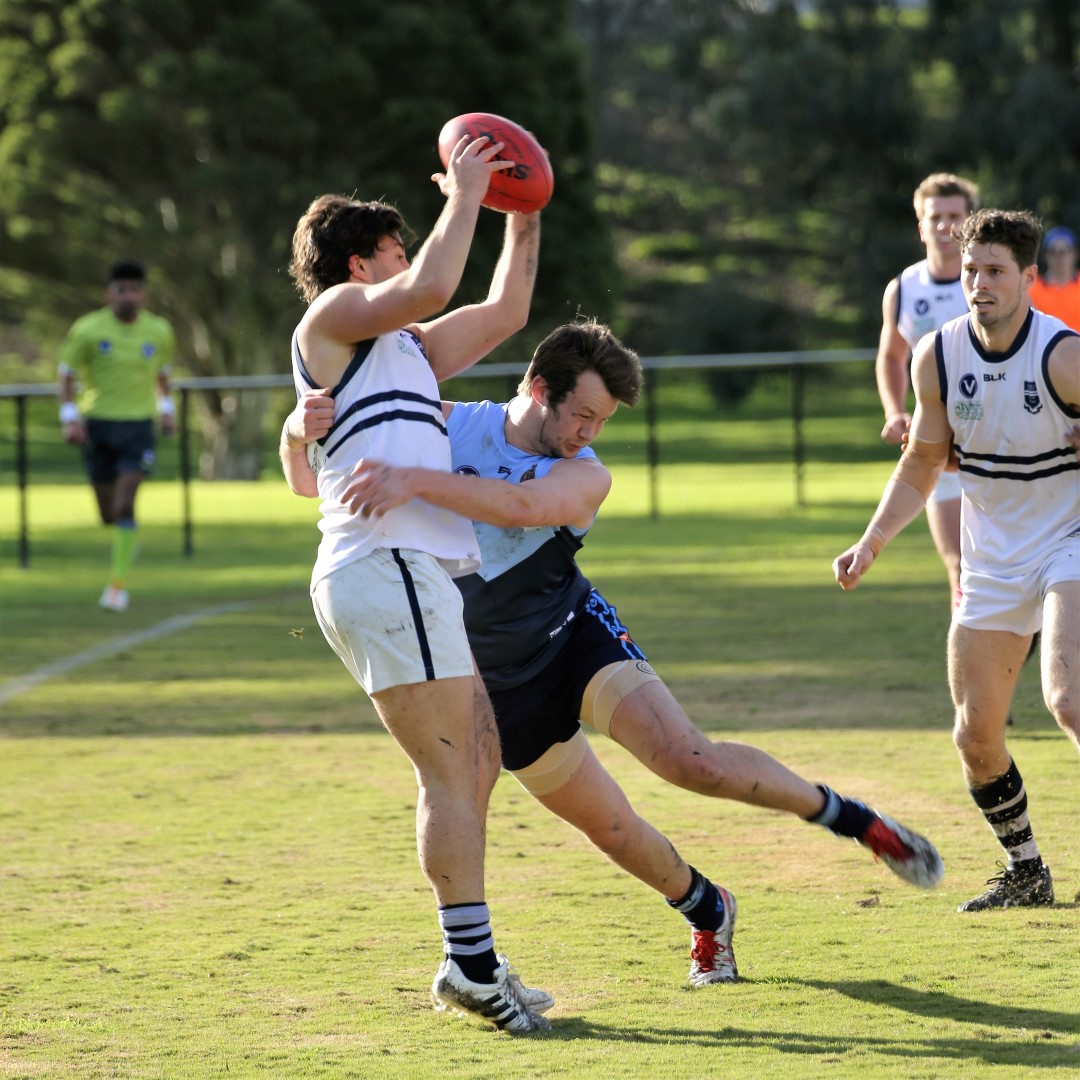 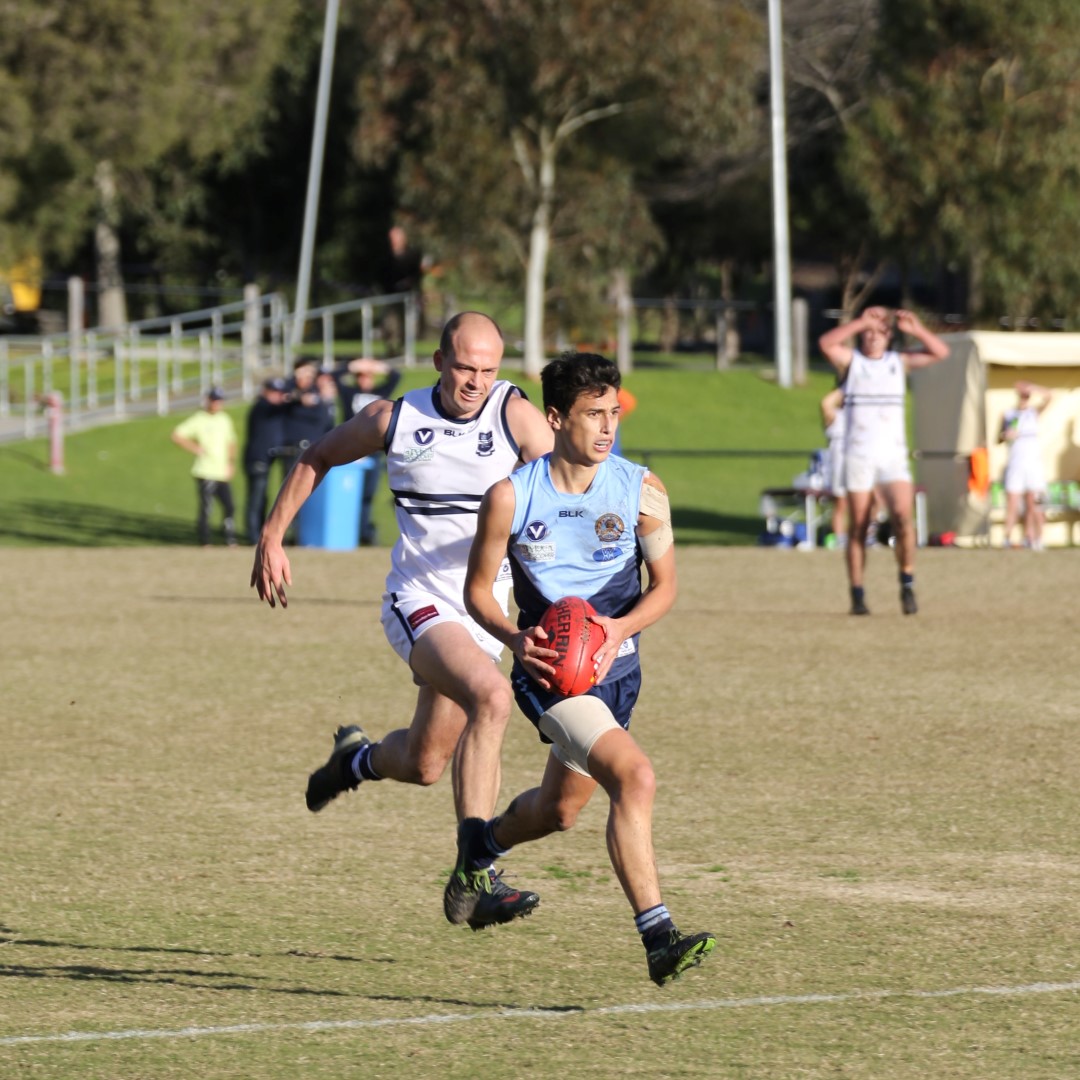 The Ressies had a tough day at the office against a well-tuned Caulfield outfit. 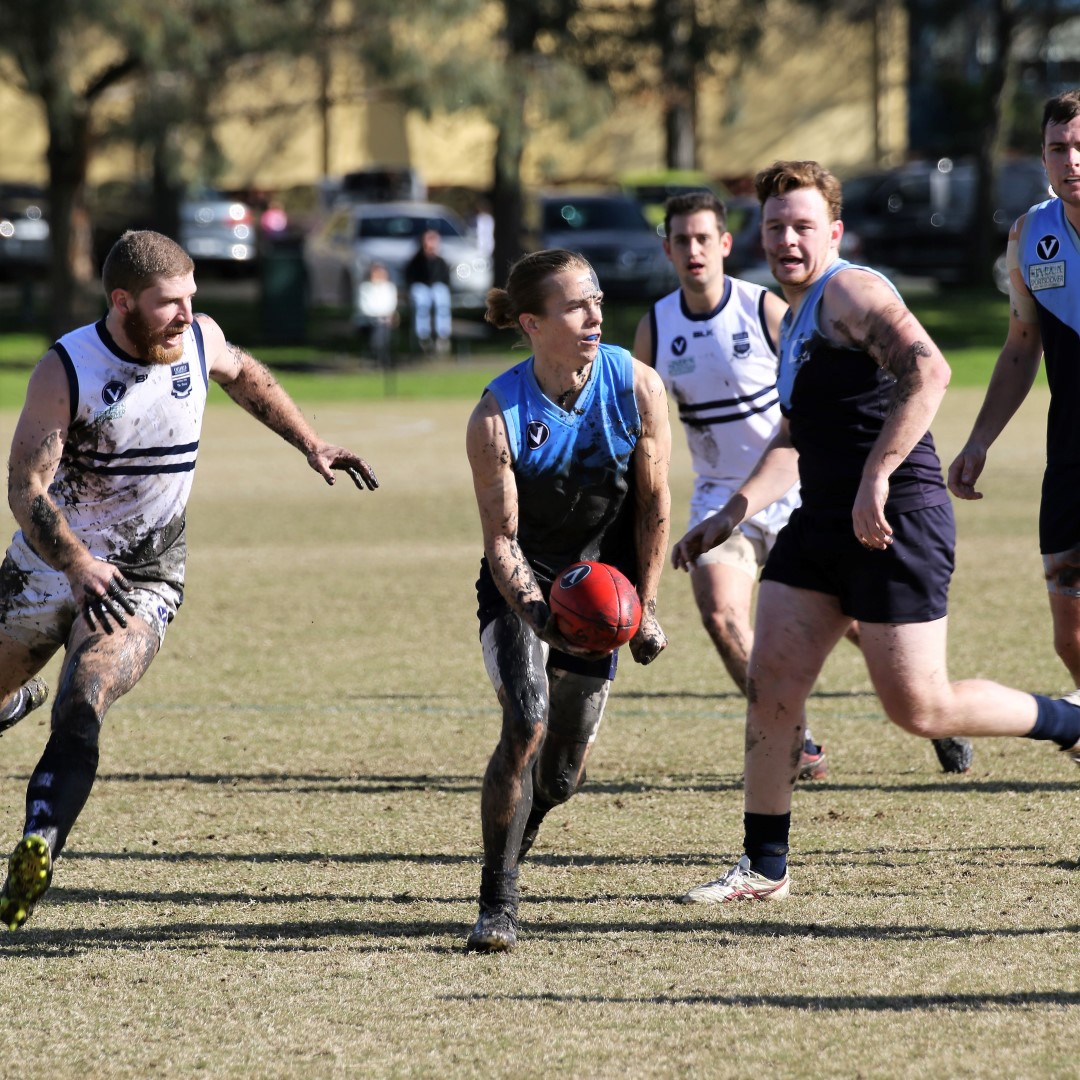 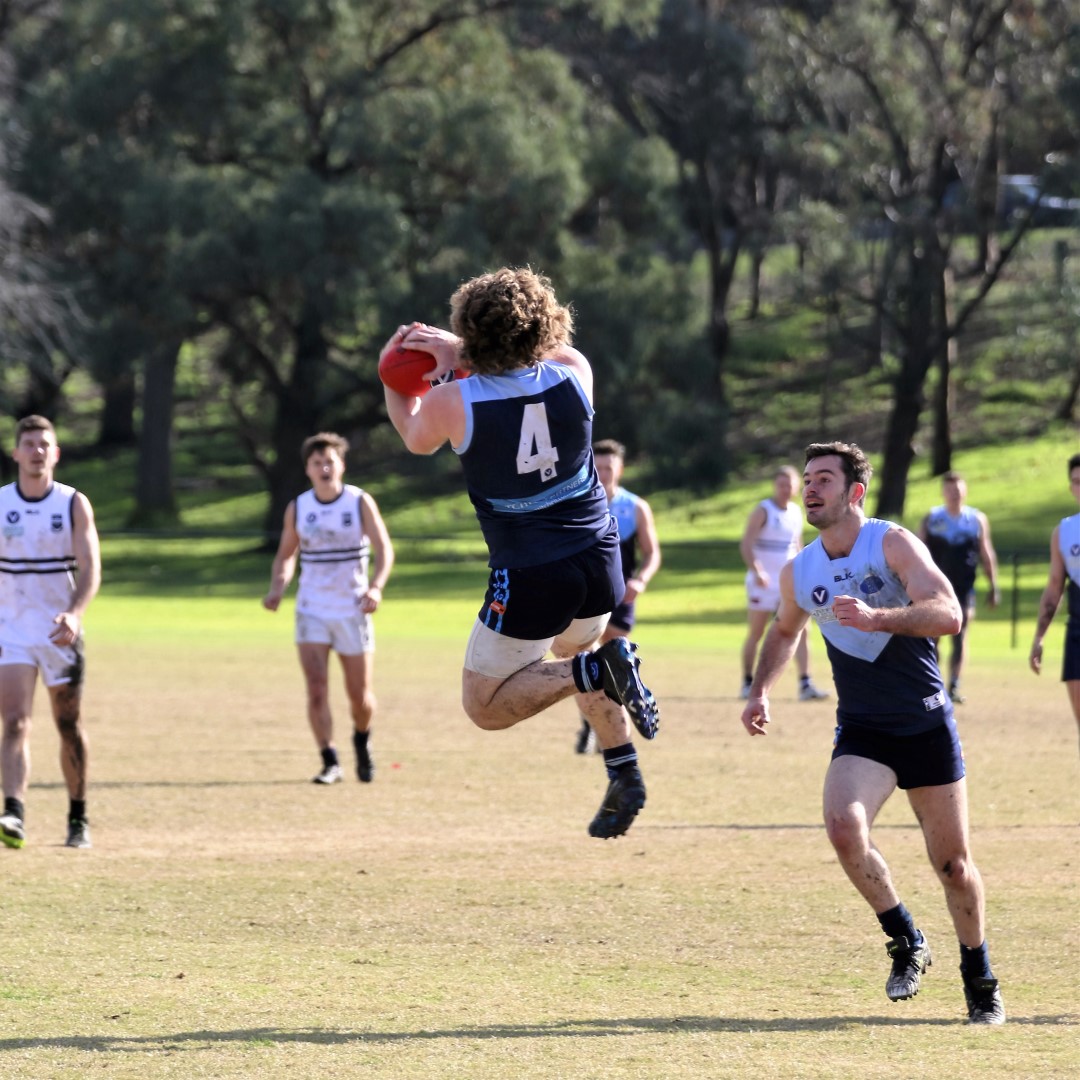 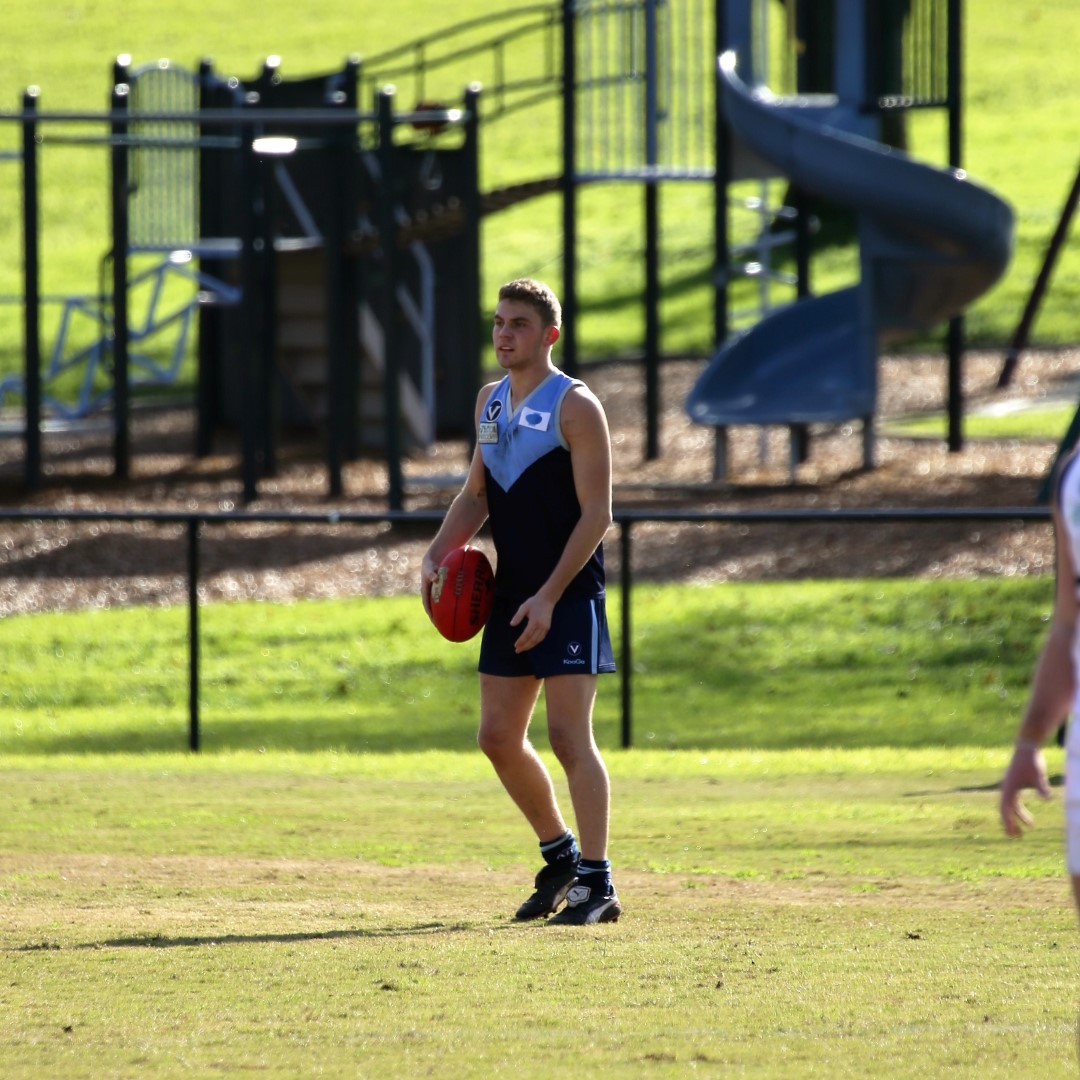 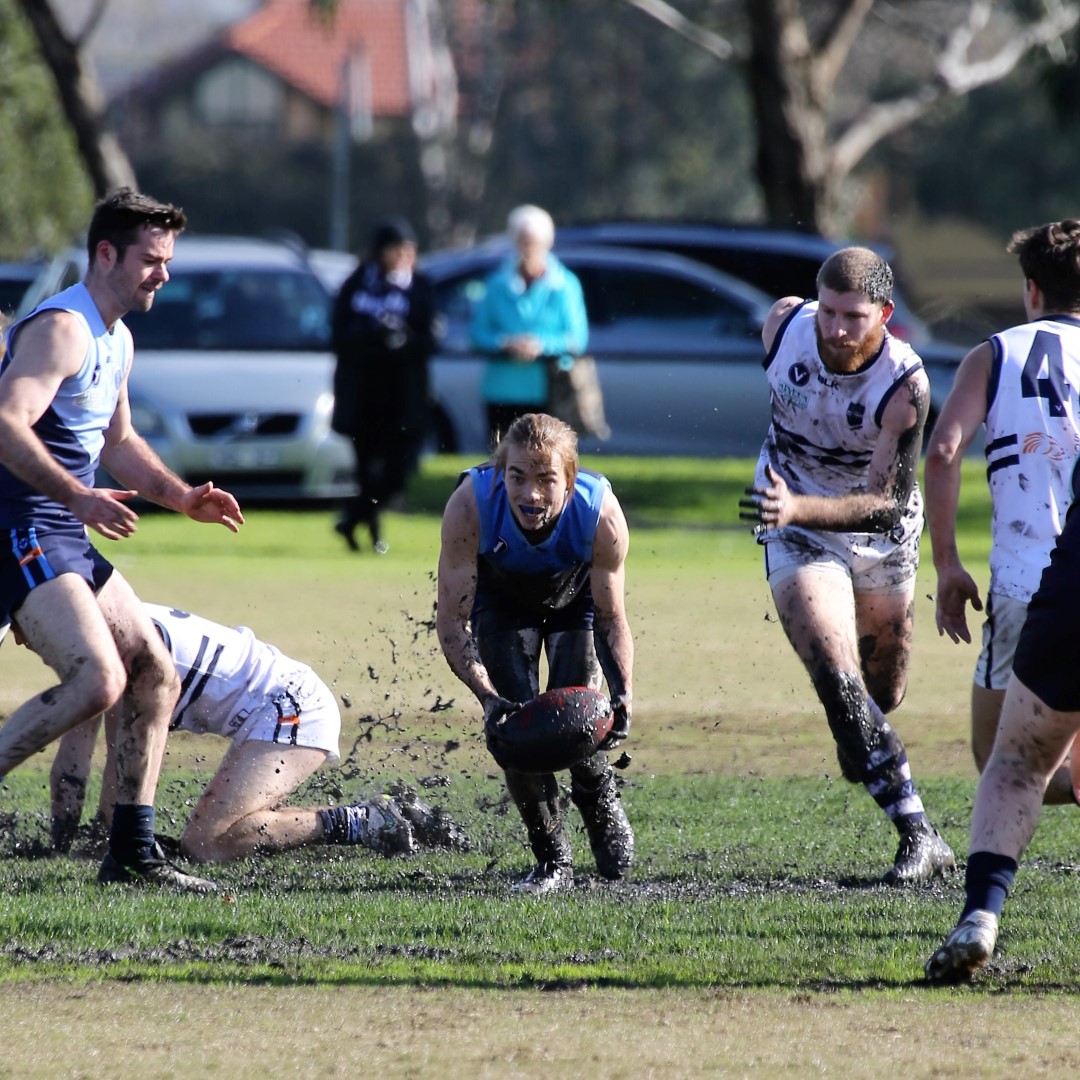 After taking on Kew last time and being over run in the last quarter we knew that this weekend was going to be tough to get the win with 5 players playing their first game for the year.

We started the game strongly with the first clearance from the middle as Tom Coleman palmed the ball down allowing Geoff to get a quick kick to Rusty who went back and calmly slotted the opening goal. We continued our dominance in the midfield as we kicked the first two for the game.

In the middle of the ground the work of Geoff, Damo and James Merrett allowed us to get early use of the ball and negate the Kew midfield. Kew, however, kicked into gear after being shell shocked and while we work hard offensively they managed to get some overlaps and quickly put three goals on the board as they took a lead in to the first break.

In the second quarter Kew dominated much of the play but thanks to the work of our backline we ensured that we didn’t allow them to convert as many goals as they had opportunities as Kew kick 2 goals 9 behind. Some great work from Brett Thompson, Julian Giovannucci, Joe Simons, Henry Allwright as well as James Bruce ensured that Kew weren’t able to pull away.
In the third quarter we narrowed the lead quickly getting the first 3 goals of the quarter thanks to the continued work of our midfield in particular Jason Hrbek who showed great work in and under at the contest.Tom Vogel continued to dominate across the wing and as he went on the way to putting a 4 quarter game. Our forward pressure was terrific as well as the work of Zach and Charlie at centre half forward providing us with plenty of options both out of defence and forward as we continued to create opportunities finishing the quarter with 3 goals 3 behinds – one of which a great snap from Lachie Bannister on the boundary line which put us in touch going into the final term. Our midfield and backs again continued to work hard and held Kew to 1 goal leaving us trailing by 5 points at the last change.
At the last break we spoke about accountable football and backing ourselves in to win one on one contests. Trailing by 5 points we knew we’d need to put scoreboard pressure early and we did with some great work across the ground. Webby then played a blinder of a quarter having double digit possessions and multiple marks in the defensive 50 that cut off any opportunity for Kew to score while Dan Lockhart had plenty of run. Combined with Josh Barrington, Geoff and Rusty all kicking goals to put us in the lead by 9 points
In the last minute Kew marked and kicked a goal to close the gap to 3 points… As the ball made it back to the middle of the ground the siren sounded and we had managed to hold on for a great win! It was a great team effort which had every player contributing to the result and our second win for the year!
Again a huge thanks to all the people who helped out – a special thanks to David Margetts (assistant coach) ,Jase Edwards (runner), Ben Coleman (boundary umpire), Painey (goal umpire) and the trainers as well as the supporters who came down to the game! We can’t play these games without your help and it is greatly appreciated!
We look forward to a home game this week and racking up a win against Ormond.
Goal Kickers: N. Russell 3, G. D”Alessandro 2, A. Mackenzie 2, J. Barrington 2, L. Bannister
Best Players: B. Thompson, Z. Herbstreit, L. Bannister, J. Simon, T. Vogel, C. Webster