Let’s focus on next week

After coming close to knocking off the top two teams in the last couple of rounds, the Seniors had high hopes for a win over Marcellin who also only had 2 wins.

Unfortunately, those hopes were dashed early in a forgettable day. TheRessies fared no better and suffered a big defeat. The Thirds also struggled with a depleted side against Ormond at GBO. No wins for the club this weekend.

All sides get a week off due to the VAFA Representative Round next weekend.

SAVE THE DATE – 16th July
We have a renowned stage hypnotist coming to GBO! More details on ourwebsite. 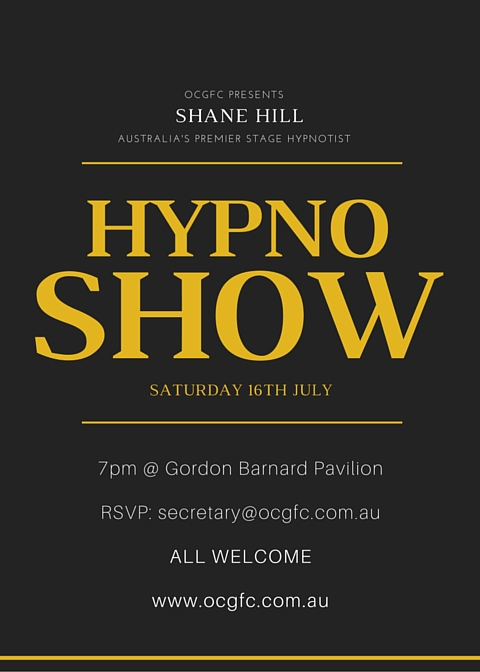 SeniorsAfter a solid month of competitive consistent football,the Wellers would run into a rampant Marcellin on their home deck.

Marcellin would start strongly kicking the first 5 goals and continually outwork their Camberwell opponents. Their hard running was evident early and our only  goal would come courtesy of first gamer Riley Verbi who did a few nice things up forward.

The pattern would be repeated in second quarter with Marcellin full of running and our boys second to the contest. Our backs led by Bennett & Deev were brave but were under siege trying to cover some tall timber with some lace out entries.

The second half would see the Wellers try to get their running game going Hart went into the ruck and Trait &Bennett into the middle.The plan seemed worked  for a short period were we got some good ball use but failed to hurt the opposition on the scoreboard.The solid Marcellin outfit would soon gain back momentum and run away with a 100 plus point victory.

Our boys need to regroup quickly as we now put ourselves in danger of the drop zone with some unexpected results in C Grade.Hopefully with the week off the boys will find their hunger again and come back with a new attitude after the break.

Marcellin proved far too strong for an undermanned Camberwell side. After a competitive first quarter the strength and skill of the opposition proved too much. Unfortunately Steff Anjou suffered another serious head injury and we were left with only one on the bench in the first quarter. By the end of the game the guys were exhausted. Better players were O Lloyd, S Clark and again thanks to the Thirds players for helping out.

Despite the challenge of limited numbers this week the team put up a great fight in the first half. Starting the game with only 15 players the thirds managed to start strongly and surprised the opposition with strong opening term in which we managed to outscore the opposition 2 goals to 1. Our forward line worked hard withRussell and Barrington both scoring goals. Margetts, Zach and Charlie Urwin had to work hard presenting up the ground as we played without wingman to start the game as well as taking on the extra defender.

Fortunately before quarter time two more players had joined the team and we were able to set-up strongly to continue to push the opposition.  In the second term we worked hard and managed to keep the opposition to 1 goal whilst also managing to put a goal on ourselves.  Our defence had held strong in the 1st half – withCunningham, Larchin, Way, Riley, Bannister, Lockhart,  Bruce as well as Nick Troy who was playing his 1st game for the club having outstanding games  in defence and ensuring that we could take a slim lead in to the second half.

Unfortunately in the second half we were unable to run with the opposition as their pure numbers became hard to shut down. Our midfield continued to work hard with Tom Coleman continuing to have a strong performance in the ruck, Geoff and Fratts both having great games as the worked not only through the middle but also to help out in defence as well.

Ormond managed to kick 7 unanswered goals in the second half and run out eventual winners by 42 points.

It was a great effort to see the limited players available take up the fight to opposition – particularly in the 1st half. Thanks to the players who turned up at short notice to help out and ensure that we could have a game and to all the playing group well done on making it a game – unfortunately we were unable to walk away with the win.

I think all are looking forward to having a week off and returning the following week as we look to put a string of wins together.