One Wellers! A great time to come together…

There was genuine excitement at the clubrooms last weekend as the Club hosted the Wellsmen’s 1972, 1978 and 1982 Premiership Reunions. Many had travelled from interstate and even overseas to join us and it was fantastic to catch-up with some club legends and stalwarts. We took the opportunity to again acknowledge Ken Wood and he kindly donated the first Best & Fairest Trophy to the club which we’ll proudly display.

I was again reminded how lucky we are to be part of such a special club. Many past players commented on how much they love OCGAFC and have had some of their greatest times when playing or supporting. Thanks to everyone who attended and in particularly to Alex Dance, Egan Smithand Pam & Daryl Brown for pulling it all together.

We’ll sort out the sound system for next year and thanks to Dave Provanfor offering to help with this.

You’ll see below that we had some outstanding results over the weekend. I know the Seniors were bitterly disappointed to lose to Old Mentone when halfway through the third quarter they drew level. But as my header points out, we are One Club and we are fully behind all our teams and will back them all the way to give their all and push for victory.

Speaking of being as one, this weekend is a special one for OCGAFC as our Women play in their first final – the semi-final against Collegians. It’s at our home – the GBO – and it’s going to be great fun. I know the team would love to see as many supporters there as possible to barrack for them and then our fantastic Under 19 team who are doing brilliantly and play after the semi.

——————-
SeniorsA 7 goal advantage to Old Mentone at quarter time was the hallmark of a disappointing loss by the Wellers this week. Wind again played a major factor to the result and it was Old Mentone’s ability to adapt and use the conditions to their favour which lead to a narrow 18 point loss.

Spurred on at quarter time after Mentone jumped out to a near 8 goal lead, the boys rallied and responded to Anson’s call to play Old Camberwell footy. Great pressure was put on by the forwards and Nick Adamson and Nick Latsas in particular were able to capitalise on some hard gut running from the mids lead admirably by James Allen.

In for his first game was young Josh Holding who was providing some flair on the wings and Shawny MacDonald also found form and was prolific through the midfield accumulating a high number of quality possessions.

At half time the team was buoyed by the response and during the third quarter limited Mentone to 3 goals with the breeze whilst piling on four themselves. Mitch Trait’s close hands and ability to release the ball out to our runners meant that opportunities kept coming and our forwards again capitalised in tough conditions.

The last quarter was a real slog. Stoppage after stoppage and our forward entries were negated by Old Mentone. 1 goal 3 to 1 goal meant we saw out our second loss in a row. The two sides have now swapped spots on the Premier C ladder, with Mentone climbing to seventh and the Old Camberwell slipping to eighth.

We will dust ourselves off and revisit the playbook and bounce back this week. 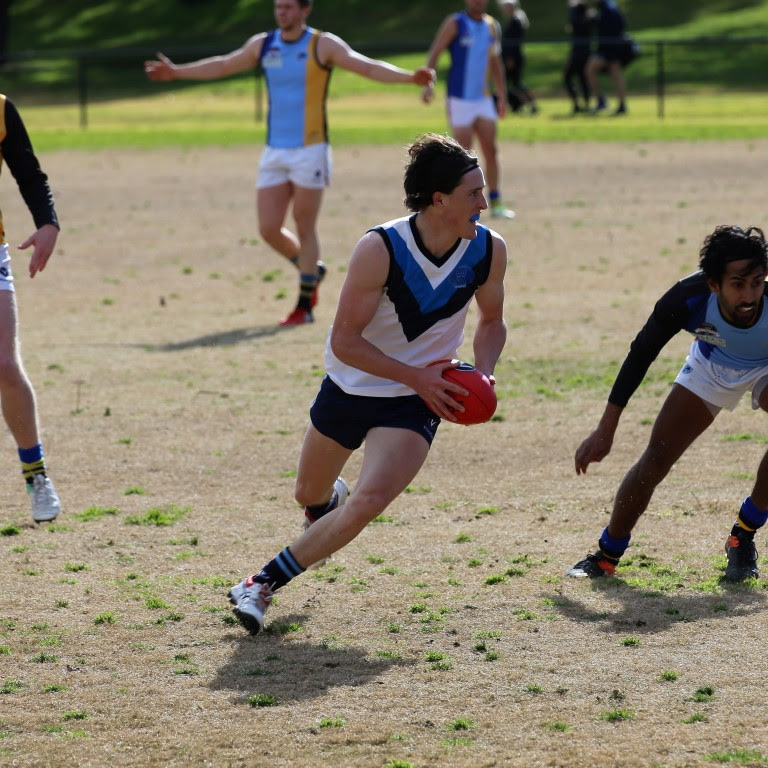 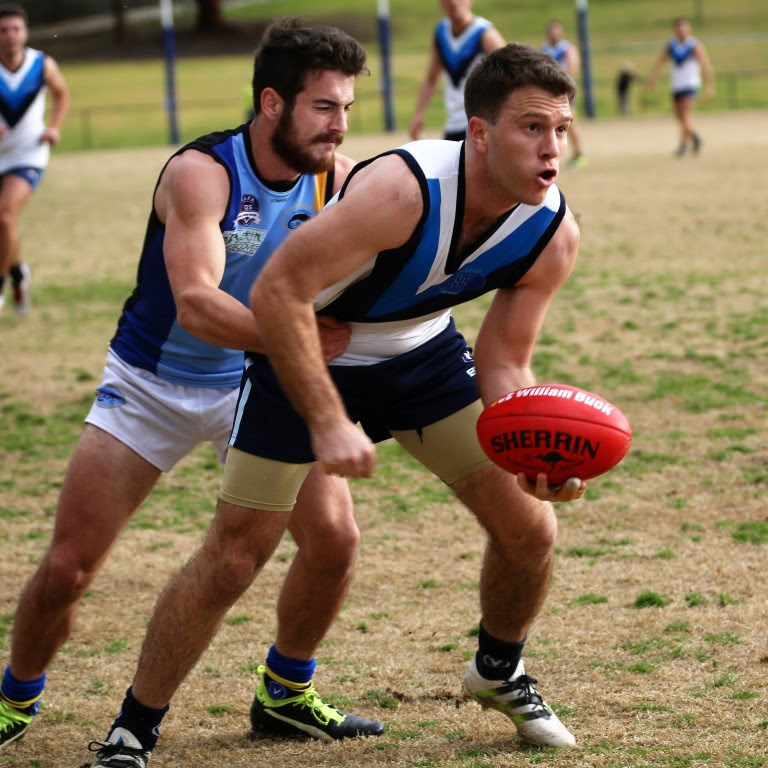 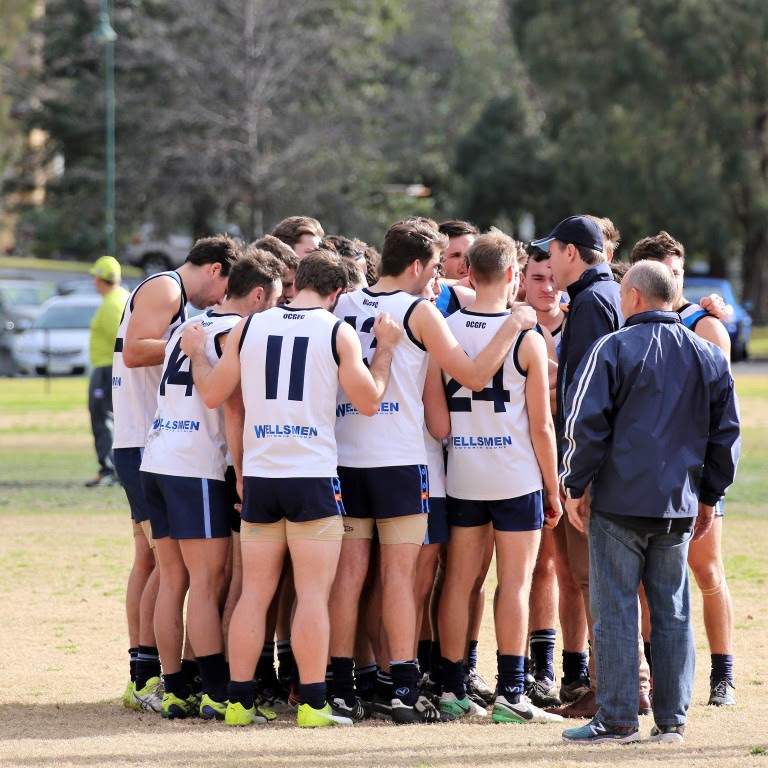 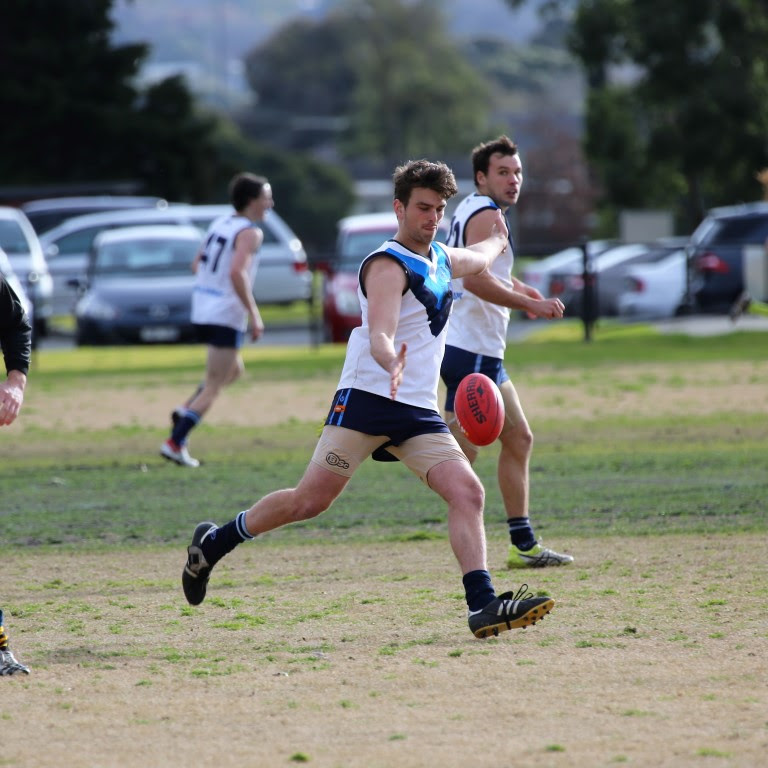 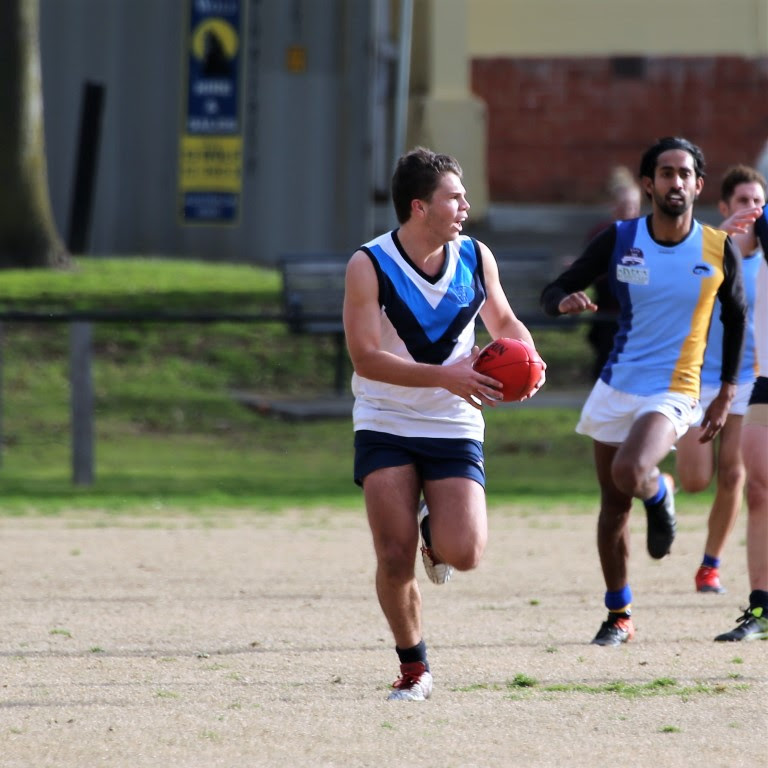 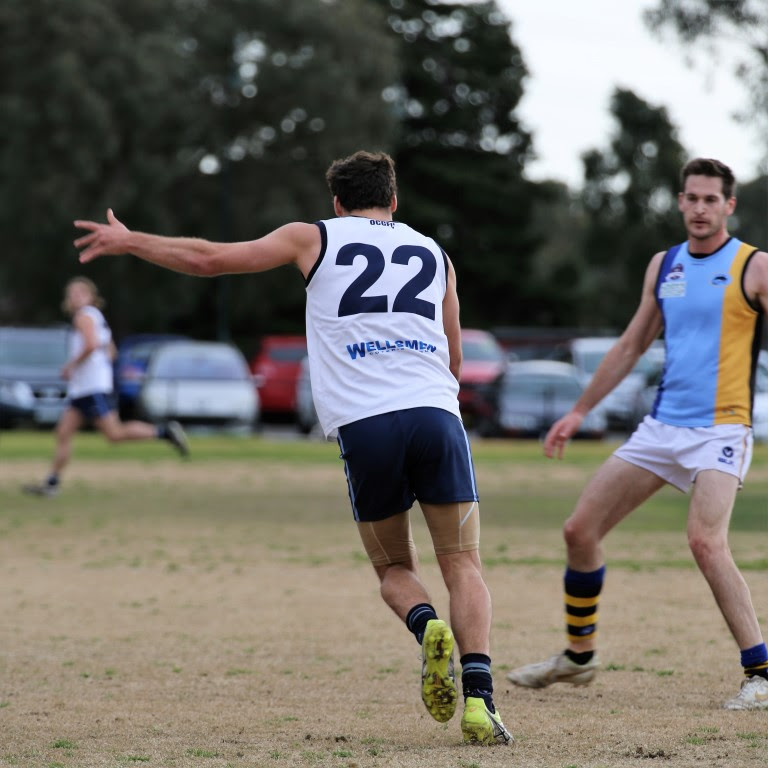 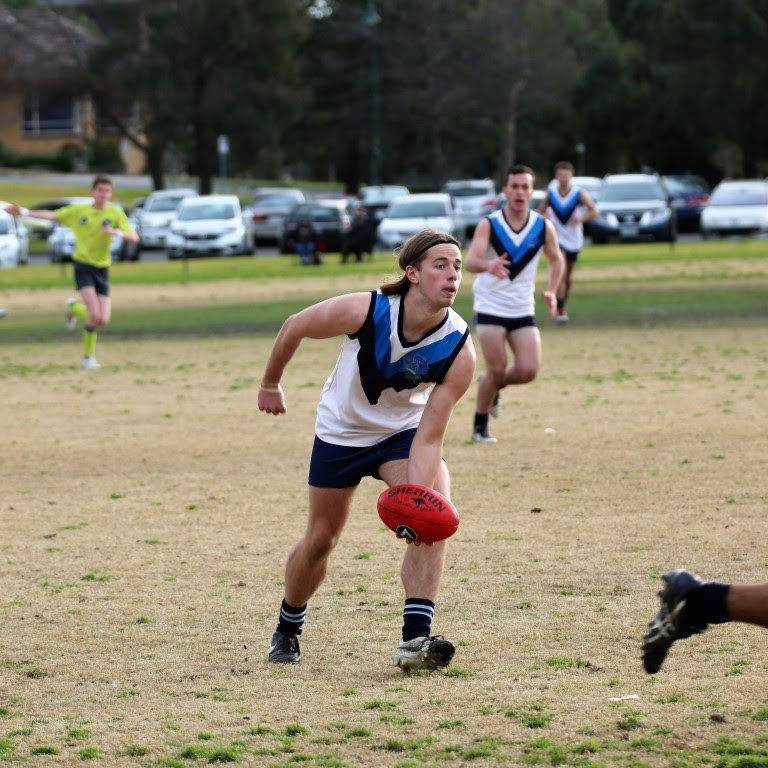 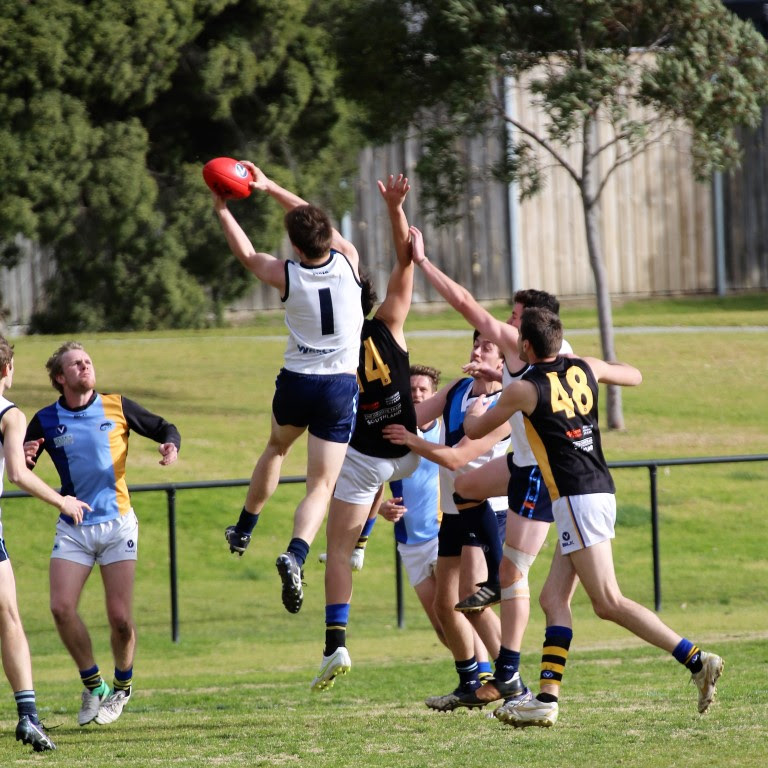 The girls team played 2nd place collegians at 4:45pm under lights at Harry Trott oval in a preview of next weeks 2nd semi final. In a hard fought game we managed a 9 point win.

The first quarter with the breeze we managed to kick 2 goals and kept collegians scoreless. The second quarter saw us get frustrated by poor umpiring and a knee injury to Steph Defina meant we had to shuffle our backline around. At half time we led by 2 points.

The third quarter they closed up the game and despite having the breeze we only led by 10 points. The final quarter was full of character and when Collegians closed to within 2 points we were under pressure. Great last few minutes saw us kick the only goal to the defensive end and we held out for a fine victory.

Obviously with a few out it was going to be hard but credit to all girls who represented us this weekend. You did a great job and played your role.

Once again our on ballers in Rhiannon Green, Sam Anjou and Claire Wilson had plenty of the ball and some excellent marking up forward by Jess Sincock and Amelia Robinson helped the scoreline. Others who contributed especially with their determination were Khalifa Mohammed, Cassandra Nolan and Sophie Bangs. Maggie Wilson was superb at fullback ably supported by an inexperienced backline.

Overall the effort was really pleasing and makes selection this week a nightmare.
Well done team for finishing on top. A great effort in what has been an exciting year.

Against the bottom side, the Camberwell boys lost the toss and kicked into the howling gale in the first quarter at GBO.

Despite the wind we took control of the game early.  Kallan Percy was rucking well, and then dropping back to take intercept marks as required.  He was ably assisted by key backs Harrison Lucas and Matt Appleyard, and Stephen Everett was lively when the ball moved forward.  Lachie Powell was marking strongly and kicked the first two goals of the game.  Mike Schumann and Harry O’Brien also kicked majors.  The highlight of the quarter was a brilliant running goal by Jonathan Tan after causing an opposition turnover through great pressure.

Kicking with the wind in the second quarter, we were looking to buil on our four goal quarter time lead.  Robbie West and Harry O’Brien drove the ball forward relentlessly to Alex Dalla Riva who used the ball intelligently up forward.  Despite the boys’ dominance, we added four goals eight for the quarter, including goals to Will Dalrymple and Harry Veitch.

We were able to maintain the pressure in the third quarter, and add another four goals, the highlight being a kick off the ground by Harry Speagle.  Jono Elliott led the way with some vigorous tackling, and Matt Appleyard and Rohan Solomon defended calmly.  Percy, West, Veitch and Dalrymple continued to dominate the midfield, limiting Peninsula’s opportunities.

The boys finished off the game well, with Declan Hudson-Mollard, Will Dalrymple, Mitch McPherson and Lachie Powell all adding goals.  Unfortunately inaccuracy struck again as we kicked four goals seven during the term.

Overall, the boys turned in a very consistent performance and showed that with the right game plan scoring is possible even into such a strong wind.  Predictable results in the other games means we must continue to win to maintain our spot in the top four. 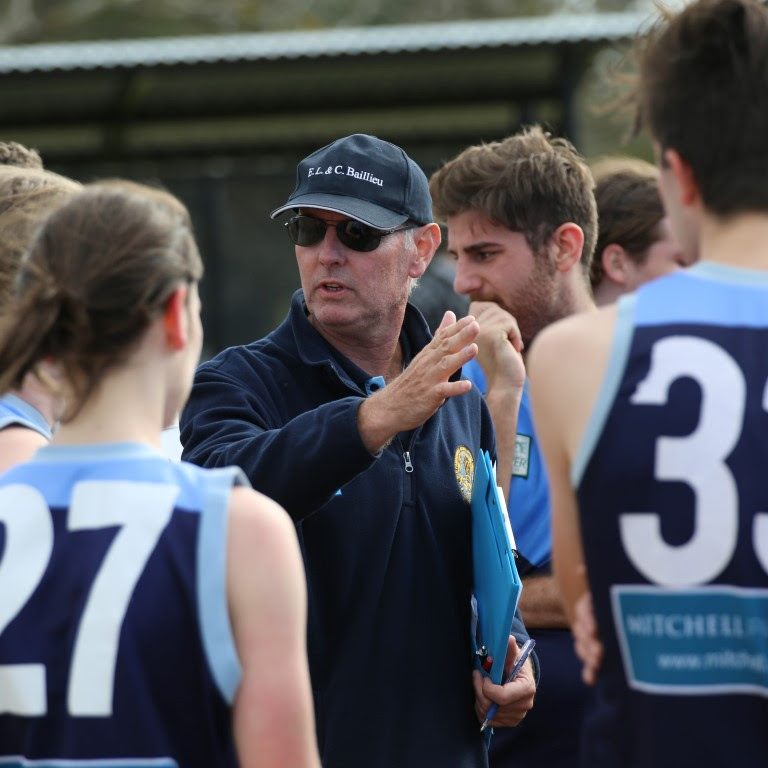 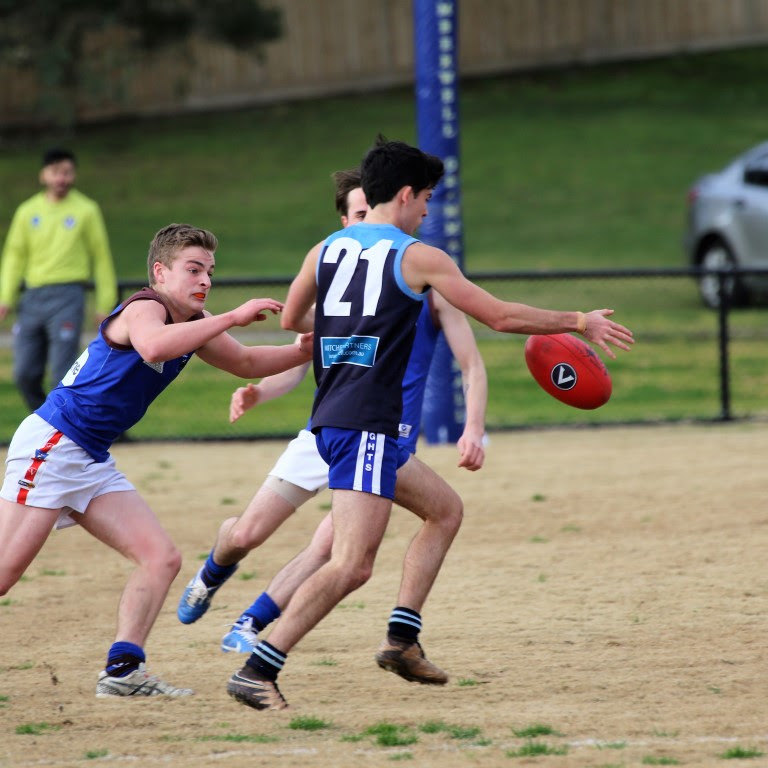 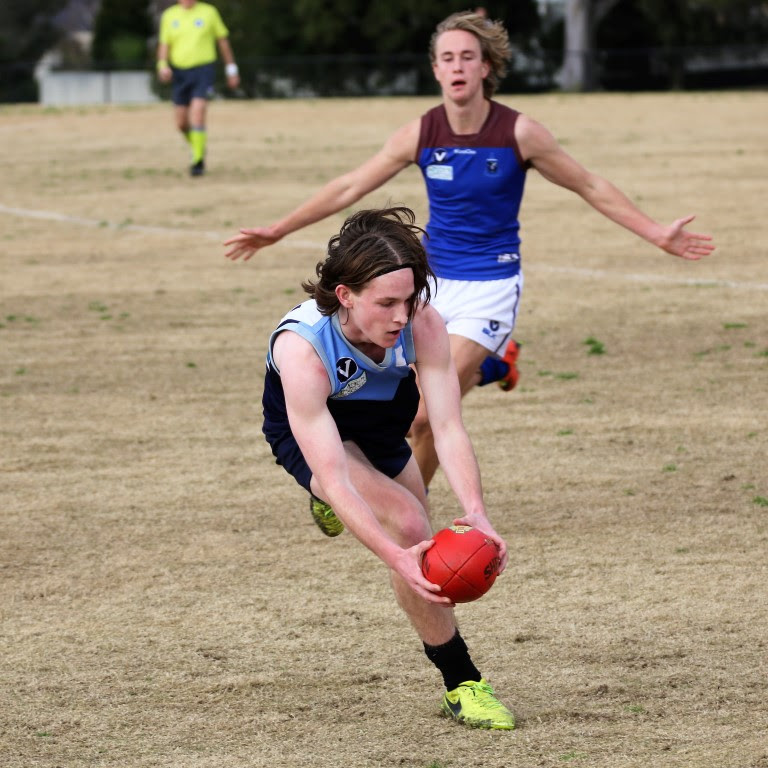 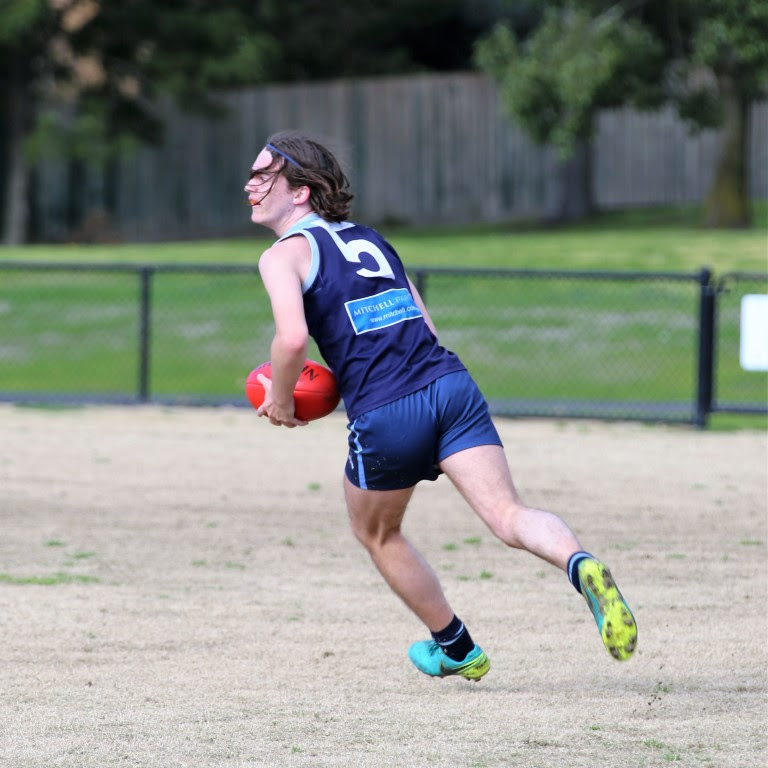 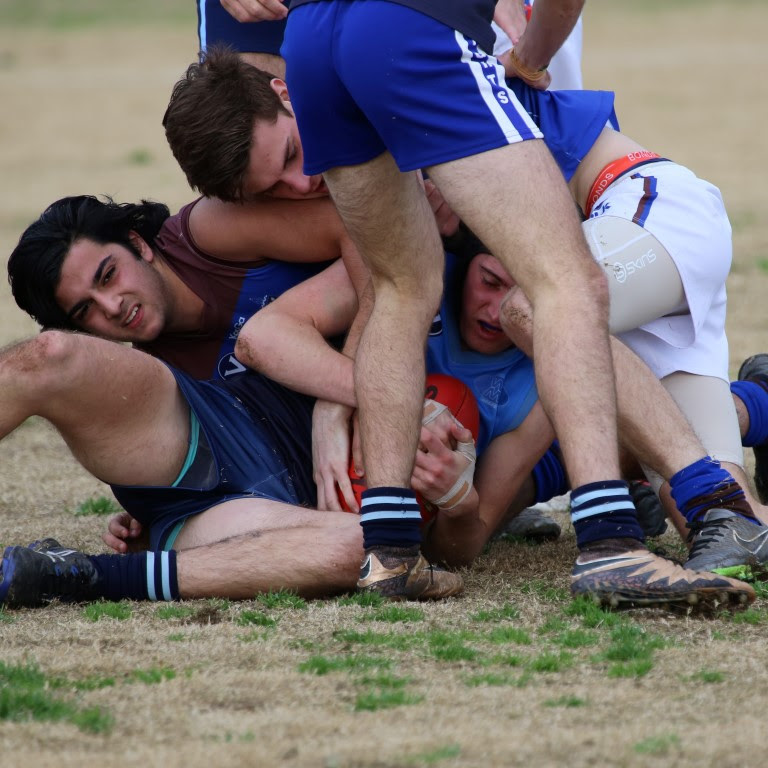