We’re often told the greatest lessons in life come after defeat. Pick apart the damage and there you’ll find the answers to your problems. Clearly that’s true but perhaps a part of sustained success is about our everyday evaluation a little more. We often breathe a sigh of relief when something goes well, internally thinking “thank goodness (polite version)” and then look to apply the same principles to our next task. 80% or even 90% of what we did may still apply but that 10% – 20% is where the sustained success can be derived.

Reading through the write-ups from a brilliant weekend for our football club, you can see the 10%-20% that made the difference from the week before or during the game.

Our Women were challenged and perhaps didn’t go into the game as prepared as they had been previously? They adjusted with Claire Wilson providing the impetus and were able to maintain their winning ways. Andrew’s comments are insightful and the experience will serve the team well.

Our Reserves passion to play a full game was evident throughout the week and they brought a level of intensity to their game our opponents couldn’t live with. Tom and Woody’s Team set the tone for the day at GBO and that feeling spread around the ground.

Our Under 19s reacted to last week’s loss with the run and dash we’re beginning to expect from them and took apart a fellow top 4 side in the process. Across the team, the performance was remarkably even and consistent with winners in all positions.

Our Seniors focussed all week on getting back to how they know they can play and enjoying it. Fast ball movement, ferocious tackling and precise disposal saw them end to end football at times. The last 10 minutes showed real grit and resolve.

Well done to all our coaching staff this week. You’re a brilliant group and we all look forward to seeing our teams improve throughout the season

The women’s team learnt some valuable and timely lessons this week as they came up against an opposition that sat bottom of the table, but showed up to play. Going into the game with four wins in a row, confidence and expectation is naturally growing within the group and there’s a strong sense that we have the ability to be a serious contender, but perhaps Saturday’s opponent was approached with too much confidence. This was a warning made in the pre-match address and proved to be right.

Despite kicking the first goal in the opening minutes of the game, the first half was really Ivanhoe’s. They were harder at the ball, first to the contest, consistently won the stoppages and handled the dewy conditions with cleaner hands. Although, not to say we weren’t in the contest at all. Our backline absorbed huge amounts of pressure, with the reliable Mirabella, Bithavas and Donkin holding strong. Lou Anderson returned to the midfield imposing herself around the ground and giving Ivanhoe similar headaches to some of the performances their midfielders were giving us. Being down at the main break was an usual position for the team to be in.

The task for the second half was clear – lift the intensity and attack the contest with intent. We needed to be the team we had been in the previous four wins, a team that harasses, tackles and pressures the opposition relentlessly. Pleasingly, there was no negative chat amongst the team and everyone was confident that if we did these simple acts, we’d be able to run over the top of them.

With the morning dew gone, much drier conditions worked in our favour as the second half got underway and we slowly began to take back the momentum. The turning point was one of those unforgettable moments in a game when the pressure is on and nothing seems to be going right. Enter C. Wilson who runs off the interchange straight at an Ivanhoe player 15 meters away, laying the perfect bump and sending her to the ground in a world of pain. Intent and hunger was written all over it. That moment seemed to rattle Ivanhoe and lift the team, igniting some of our key players whose usual contribution had been missing in the first half. In defence both M. Wilson and S. Defina had been caught out by playing behind early on, but worked hard to find front position and nullify the Ivanhoe attacks. Similarly, Taverner had had a tricky time dealing with a clever half forward flanker, but held her own as the backline tightened up.

A two goal to one point third term gave us a small lead at the final break, with momentum. However, to their credit, Ivanhoe fought back and pinned us in our defensive half for much of the final quarter. In the end it was a sensational mark and goal from E. Defina who split the middle from about 30-out that made the difference. Combined with a dogged performance from the backline, and Booth, Opray, Nolan and Anjou tirelessly running back to help out in defence, was enough to see us over the line.

A really pleasing aspect was the amount of support and positivity coming from the sidelines. Our players cheered every time we laid a bump or a tackle, while the Ivanhoe bench stayed silent. No one took their frustration out on a fellow team mate when things weren’t looking good. This speaks volumes for the character, culture and comradery this team has developed in a short period of time.

In all, our best and most physically tough contest and win for the year, great to know we can ground out results when needed. Important to take away that the womens’ competition is extremely unpredictable. We can’t assume anything based on ladder position or previous results. Old Carey, our opponent this coming Saturday, lost to Oakleigh on the weekend who are second last, but previously smashed Ivanhoe in the grading games. Every game will be a fresh challenge. 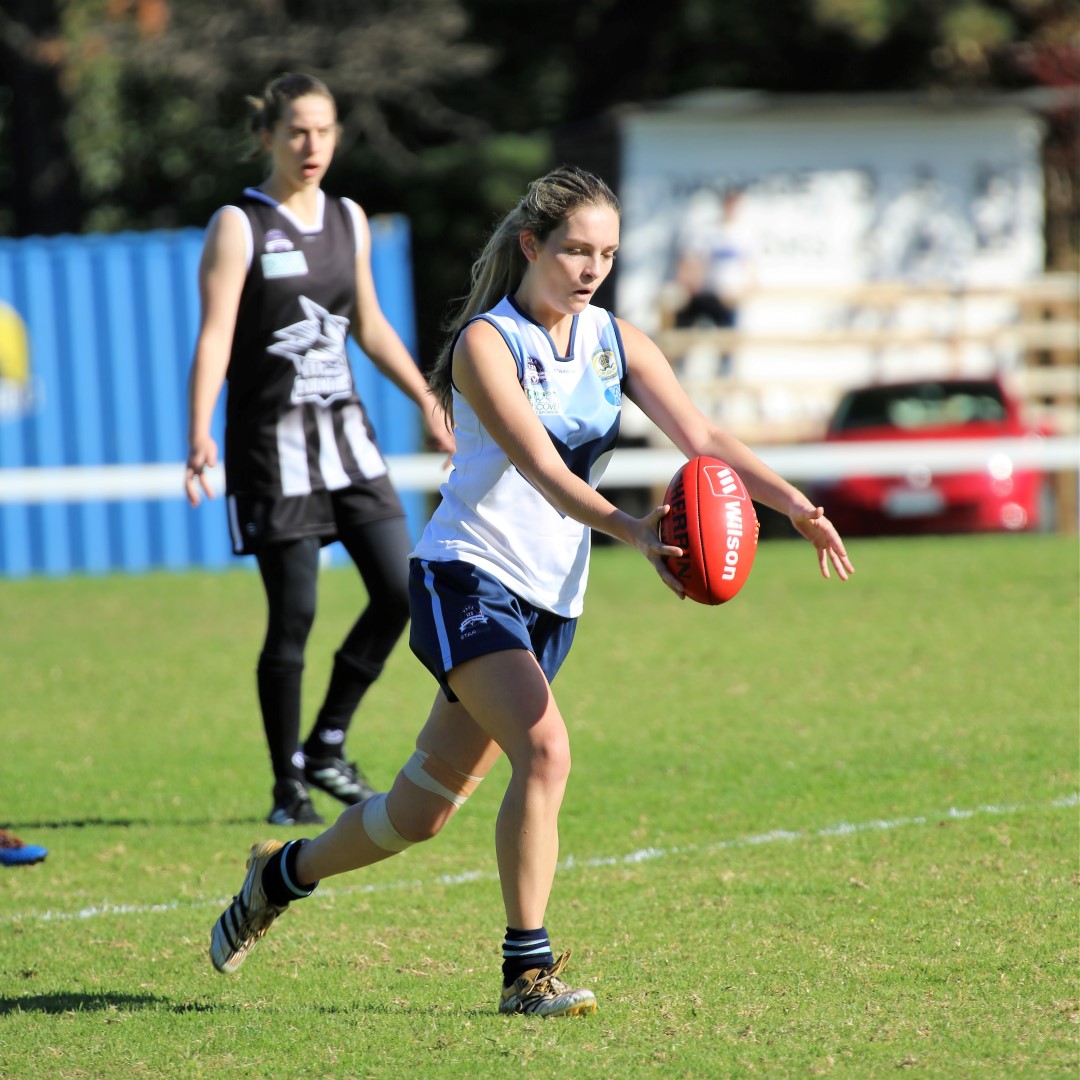 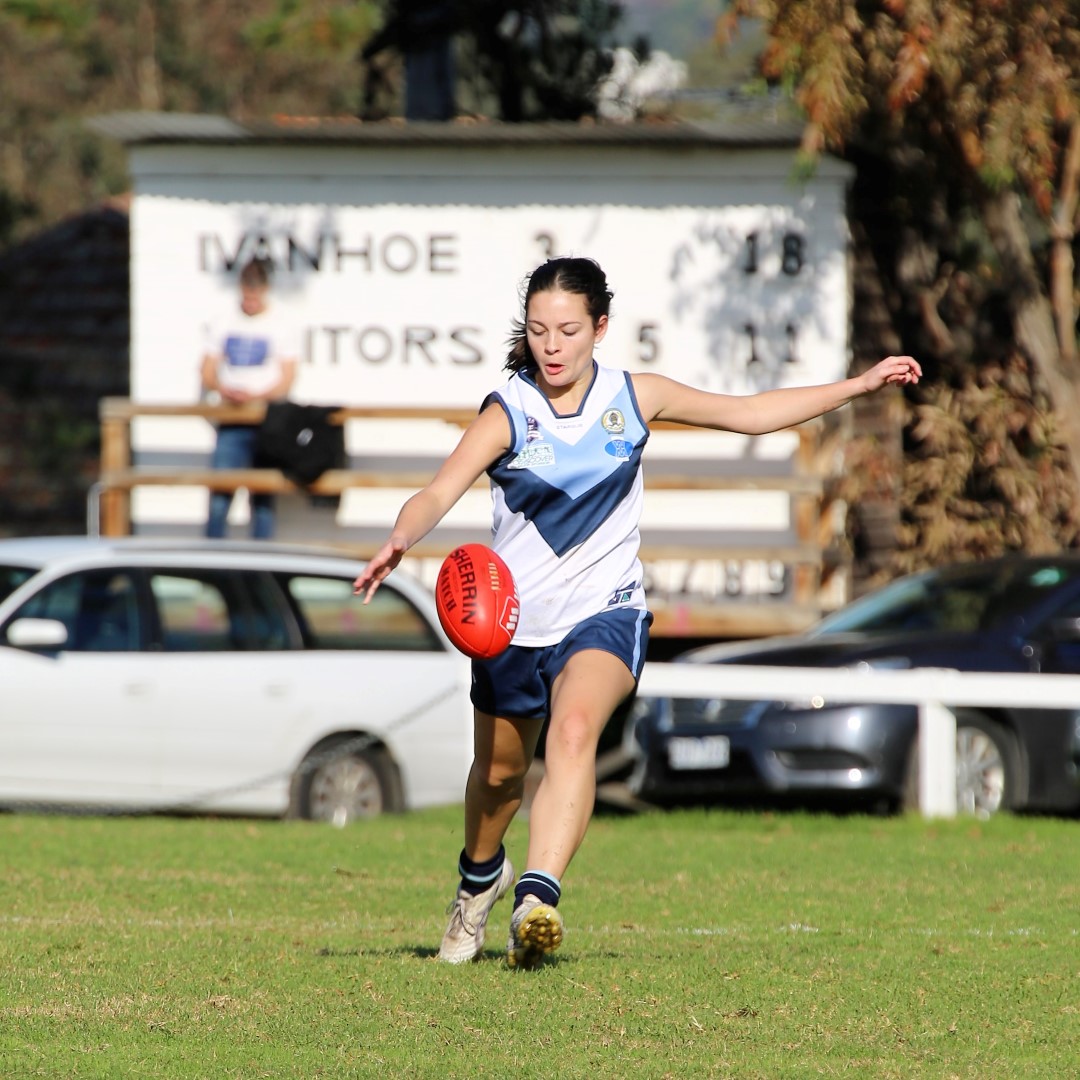 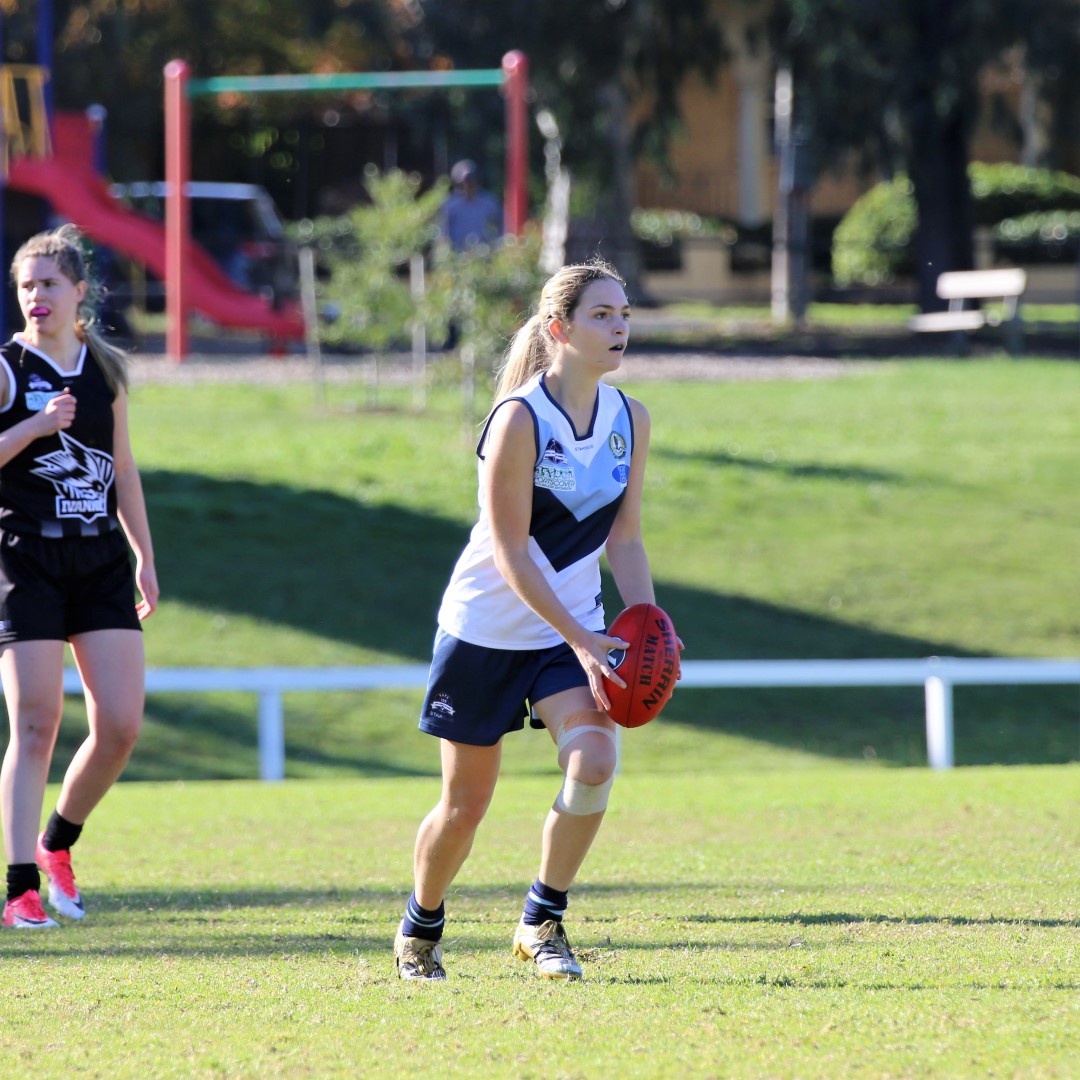 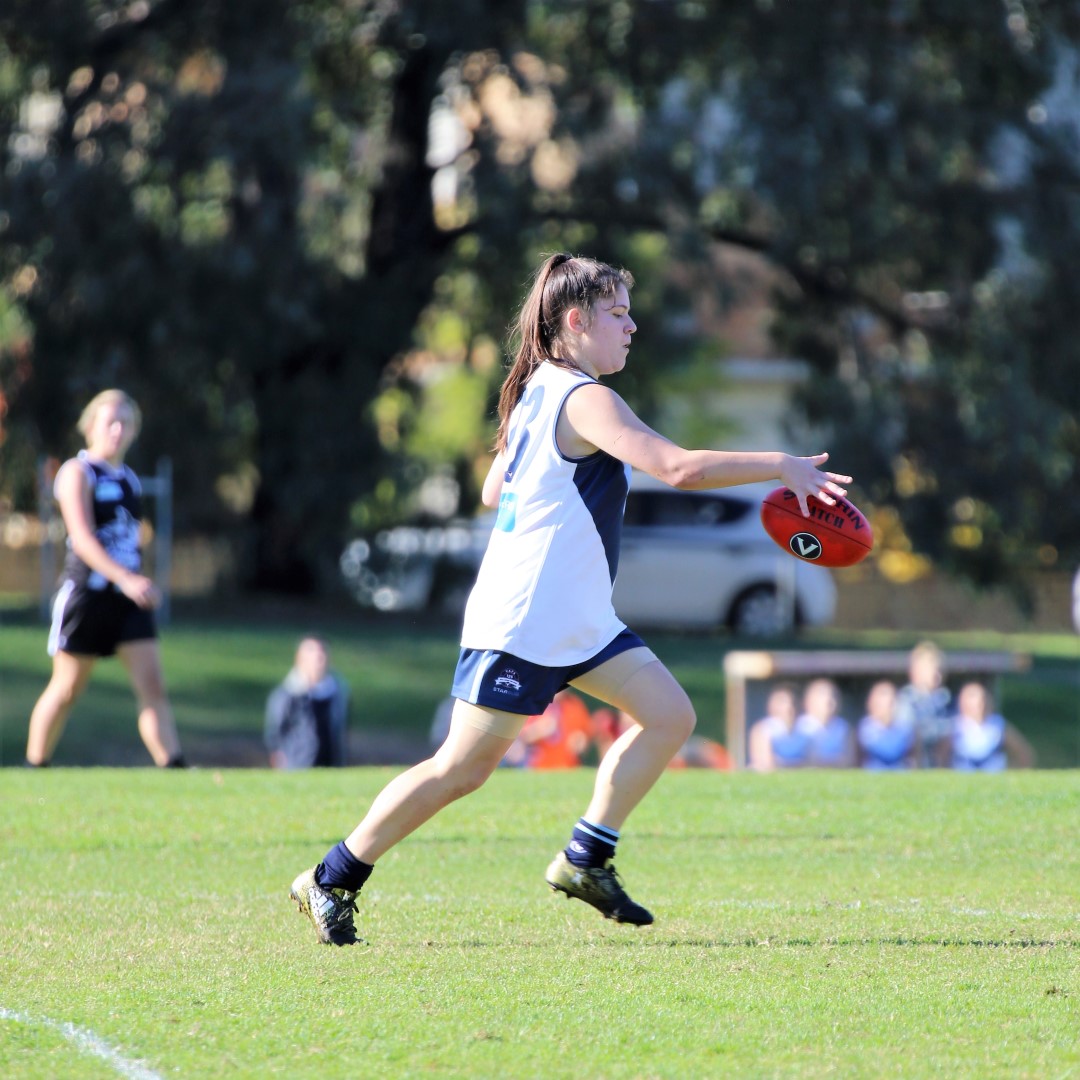 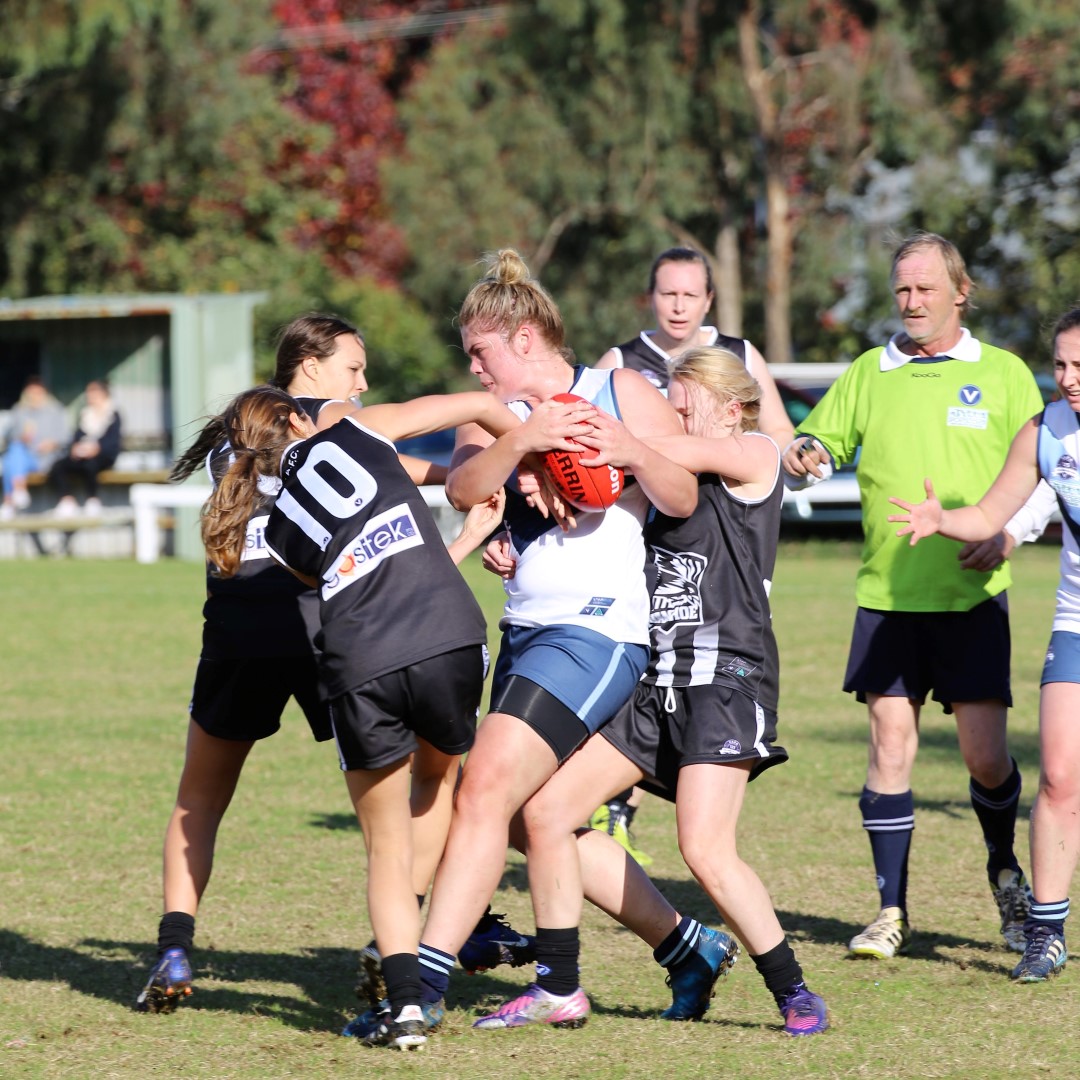 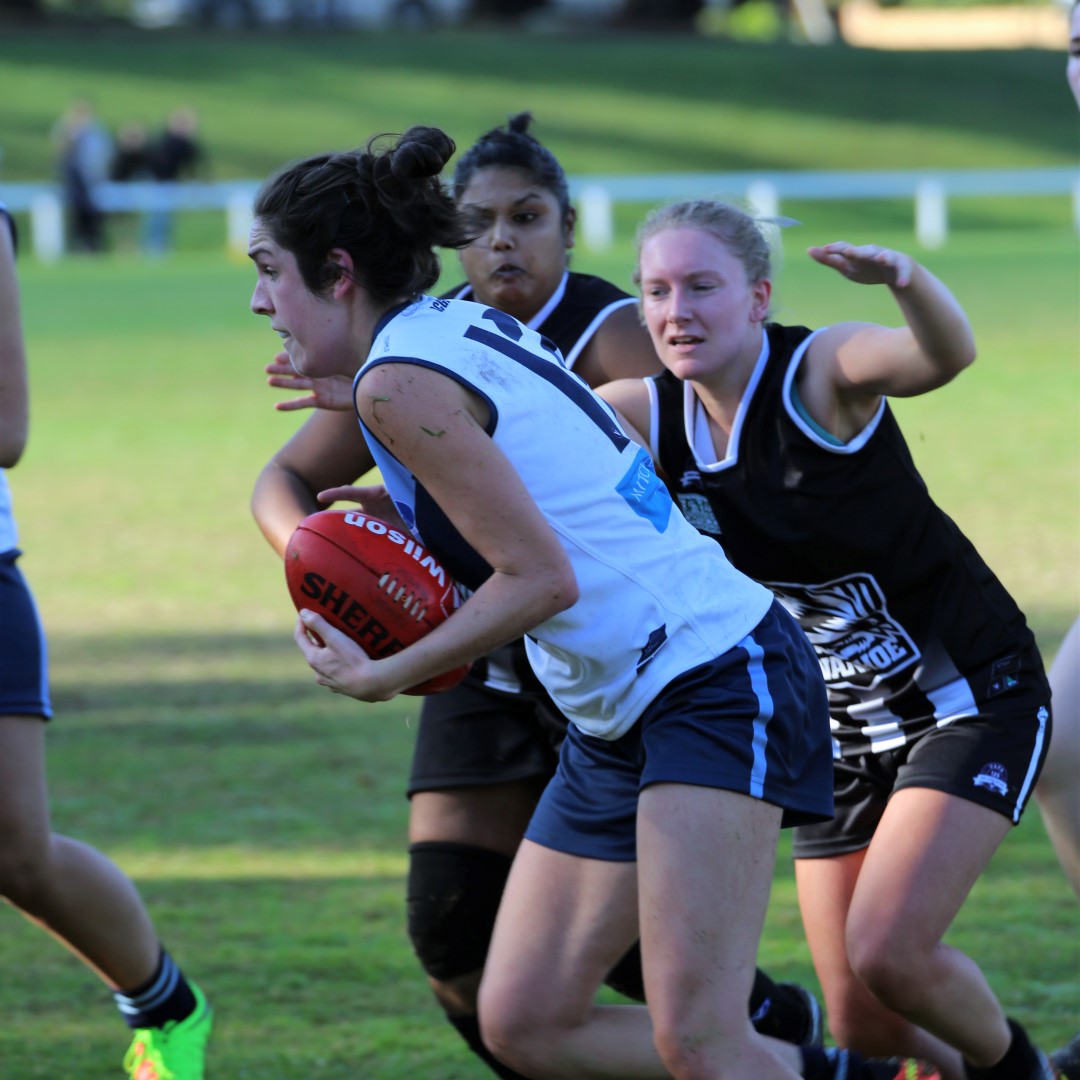 SeniorsThey say “a week is a long time in football” and the old cliche sums up The Wellers after last week’s heavy loss to Old Haileybury as we saluted our team at home with a well deserved 11 point victory.

From the first bounce the boys were hungry for the physical contest and Williamstown were unable to live with our immense pressure and some supern, slick ball movement. Hart, Wells and Mcdonald would set the standard in the middle and Nick Adamson was unstoppable up forward in his comeback game kicking a first quarter bag as we kicked away to a 6 goal lead, our best first quarter effort for the season.

The second quarter saw the same commitment levels from our boys and our backs, led by Bennett, Wilson and Allen dominated their opponents and set up many Camberwell attacks. Our work rate was up and we went  into the long break with a 35 point buffer.

Williamstown are a good side and we expected a reaction from them after the long break. So it proved as they began to get their running game going and a few costly mistakes resulted. While we held close to a 6 goal margin going into the last quarter, the breeze and Willy’s pressure started to build and they pulled to within a goal. It appeared the momentum was theirs. It was time to stand up and be counted and I am pleased to say “the boys stood tall” across the team, Fras kicked a terrific clutch goal on his right after terrific midfield strength and we broke their momentum to run our winners by 11 points.

Well done to the boys for one of our best wins of the season against quality opposition. Thanks to all trainers, helpers and supporters on the day. Wonderful to see plenty of passion on the sidelines. 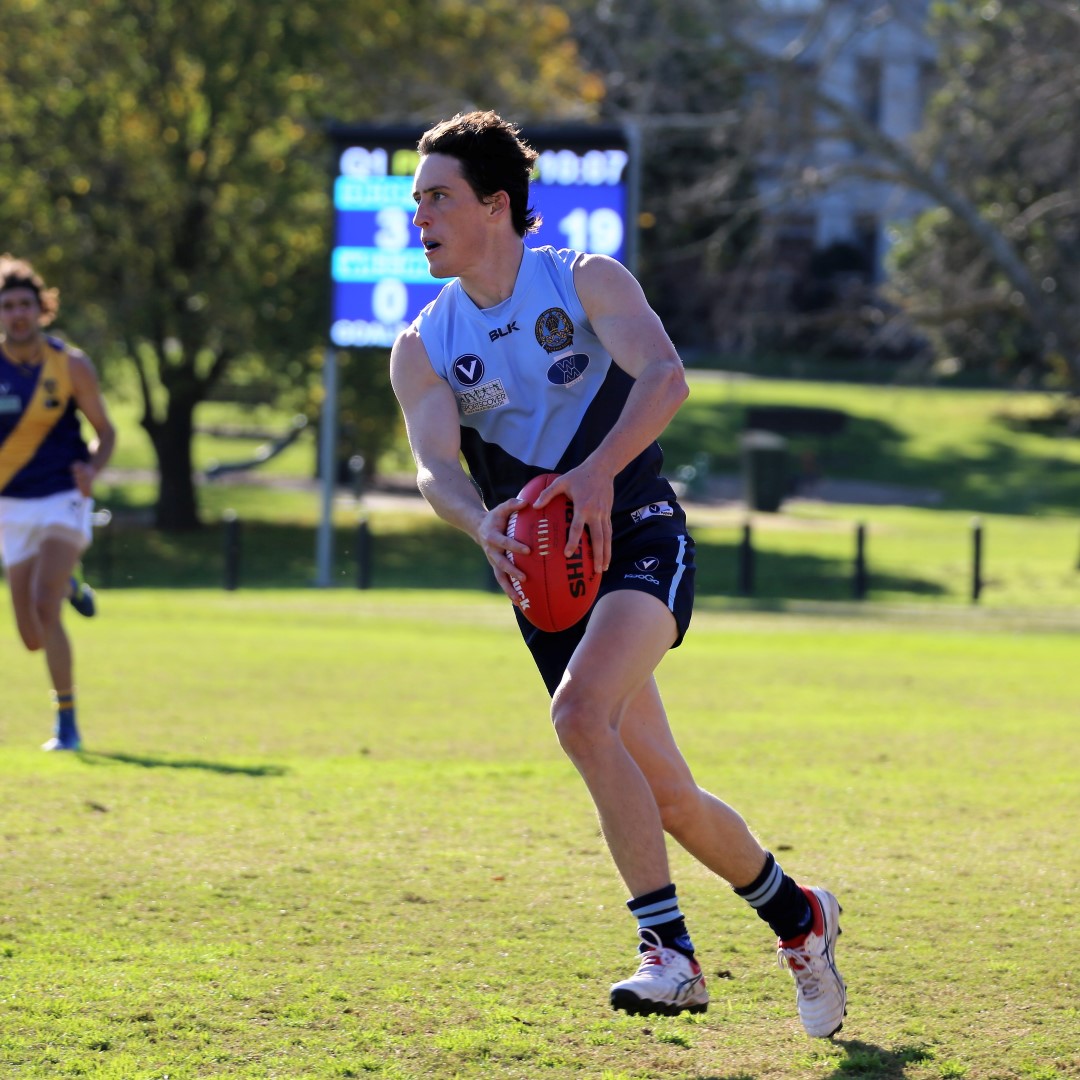 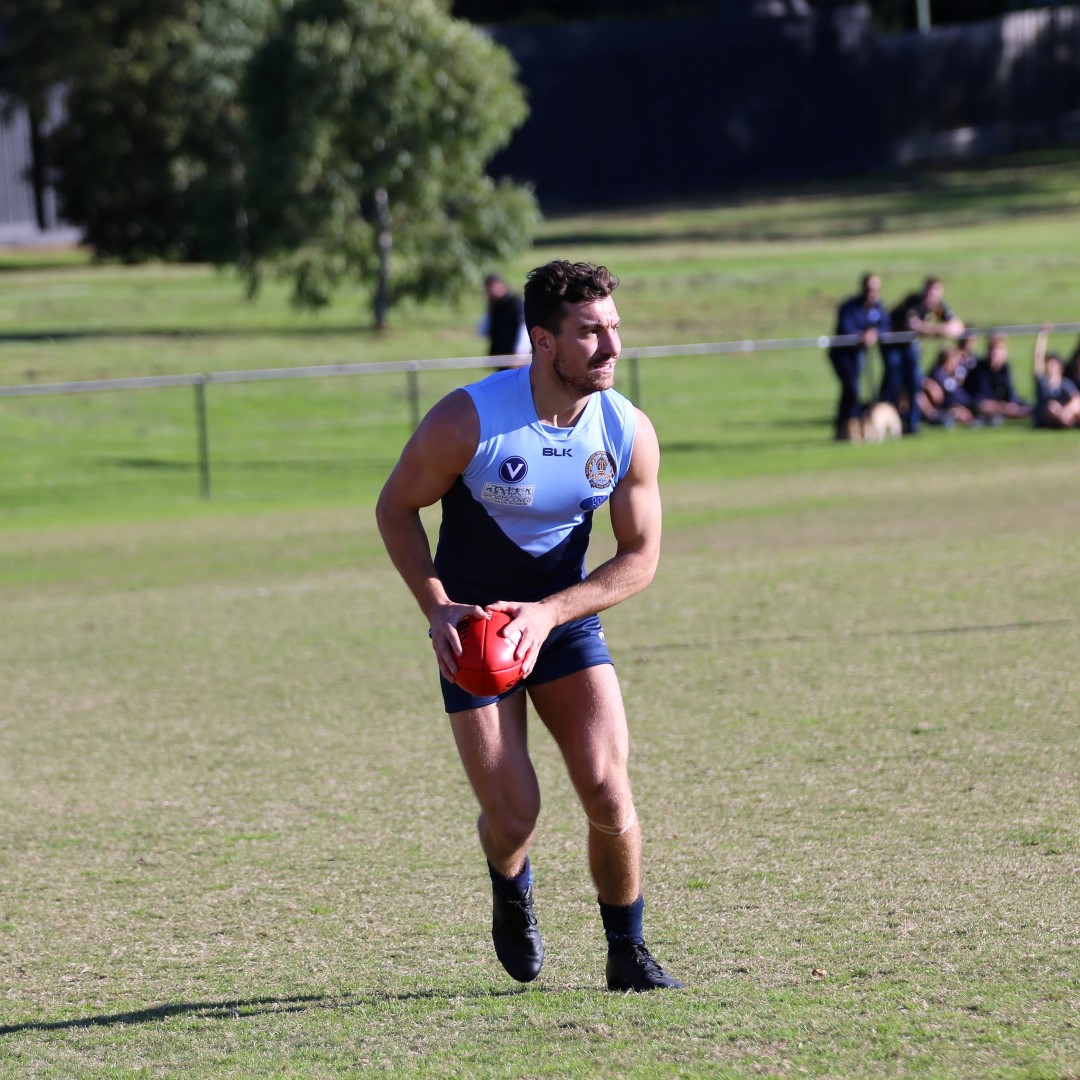 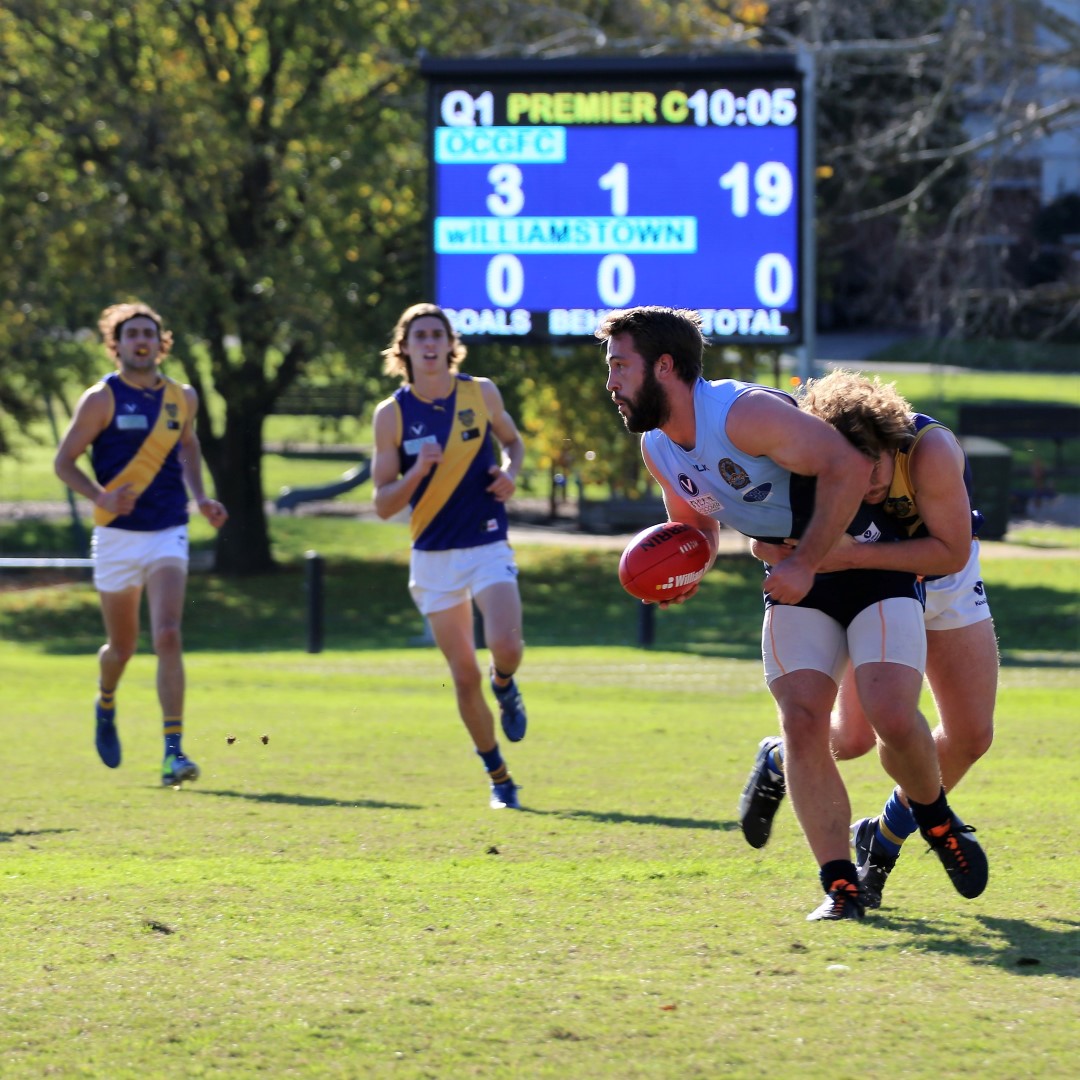 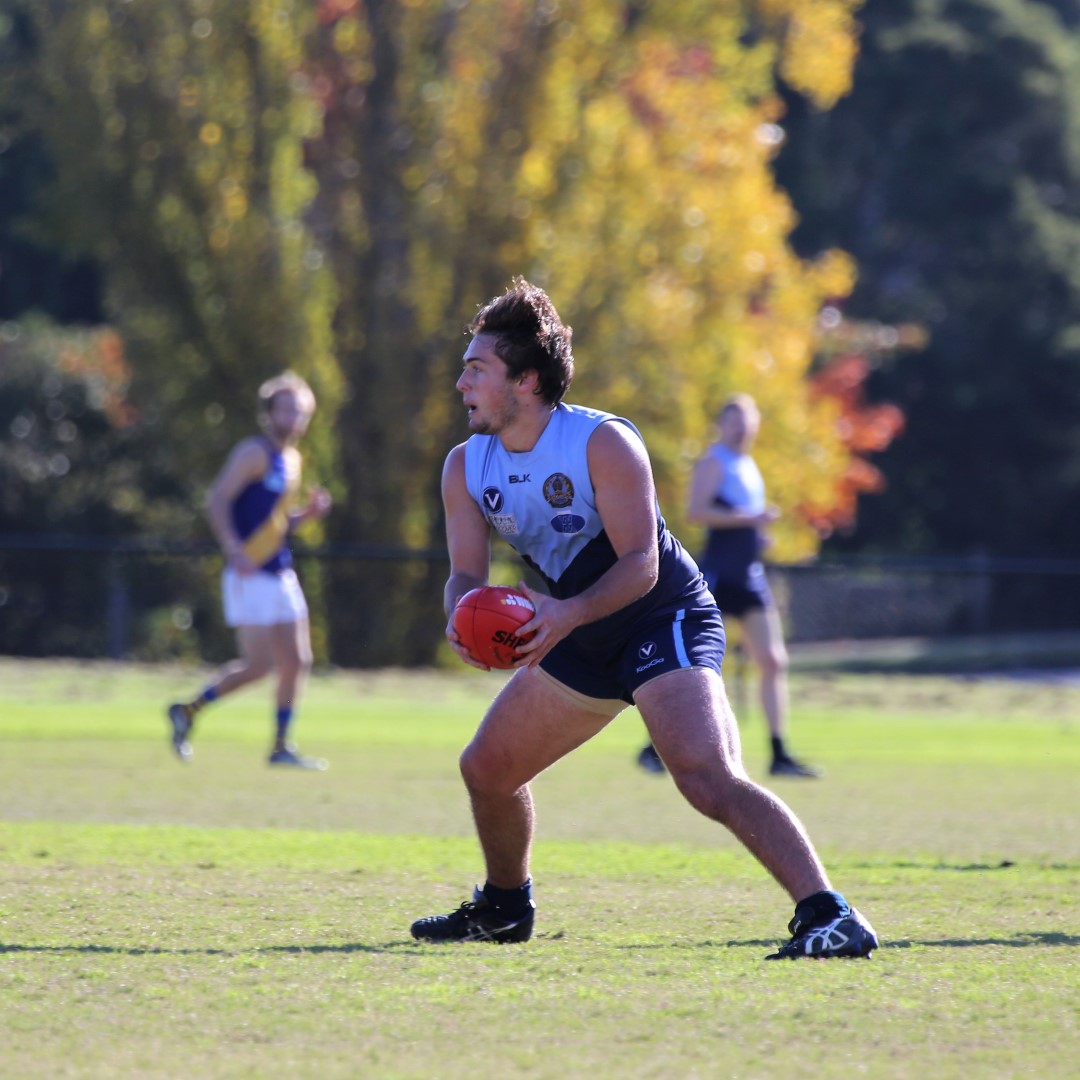 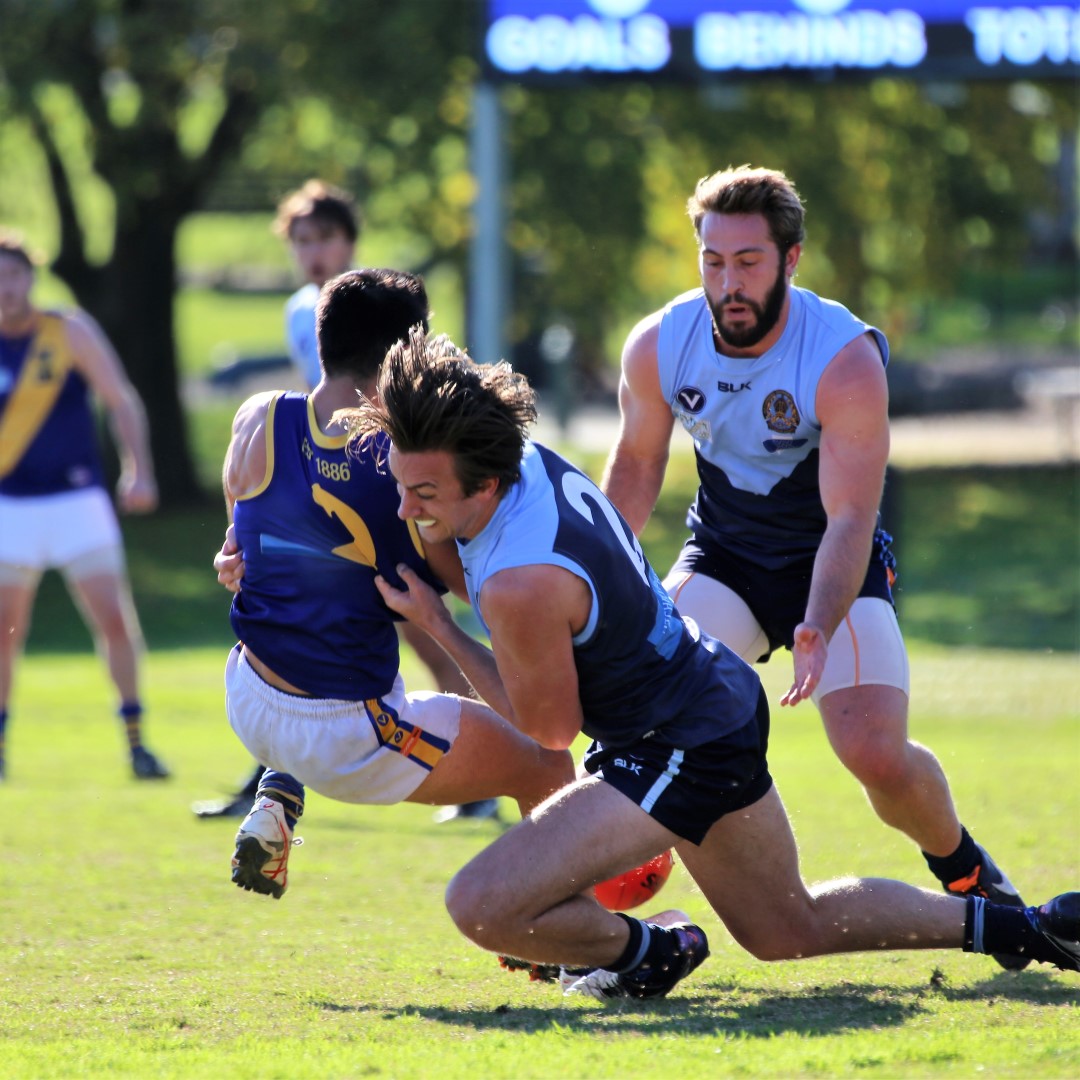 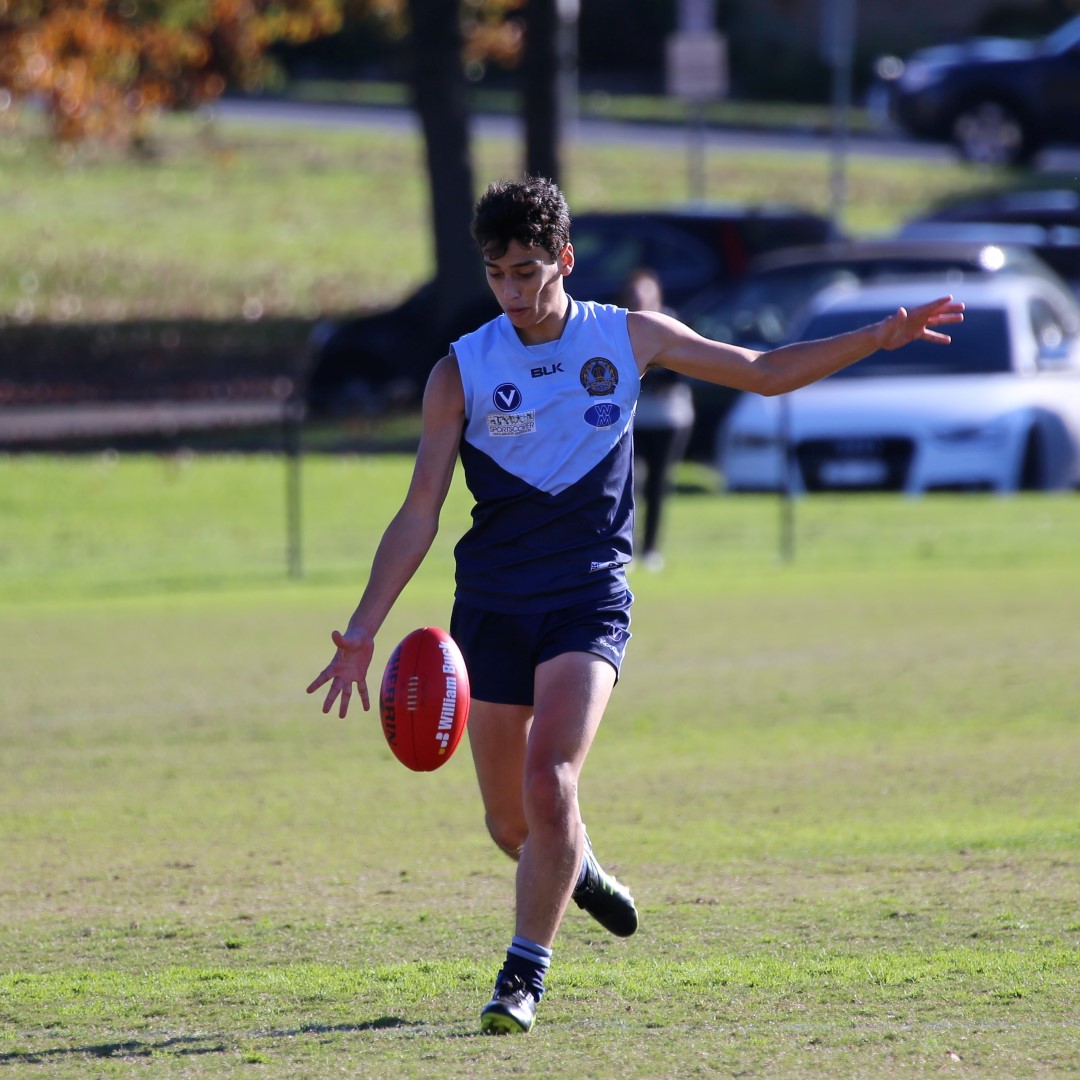 ReservesAfter a disappointing week last week, the Magoos were able to bounce back against Williamstown off the back of contribution from 22 players over 4 quarters which was very pleasing to see. Hard work on the track over the week and a renewed focus on our structures and organisation would see us defend well, win the 50:50 contests and move the ball quickly to an open forward line.

After conceding a few early goals and despite coming up against a jumping beanpole of a ruckman, Herbstreit was able to adjust and give us some drive from the centre and we took a 2 goal lead into quarter time. The second quarter was an even affair and we went in to half time with a 3 goal lead and a real desire to mark our authority on the game. Despite starting the 3rd a little sluggish, our midfield, led by Simon, started to gel and we lifted to kick 8 goals for the quarter and double our score. Pleasingly we were able to maintain this momentum and run out the game with Kanz, Christiani, Stone and Stayner working tirelessly through the midfield all day.

Stanboultgis and Mann provided great leadership all day at half back whilst Huysmans and Eastick were able to kill any ball coming in and deny any easy goals. Our small forward line was a constant throughout the day as we were constantly on the move at the feet of Gilmore and Rusty who competed well. Kaiser (5) (in a new role up the ground) and Allen (4) (known as “Redhead” to the umps) saw plenty of the ball and pleasingly we had a spread of 10 goal kickers.

The challenge this week will be to demonstrate consistency and show an understanding of what we were able to do differently from other weeks. Finally, welcome back to Campbell who played his first game for the year and congratulations to Clarke who played a very solid 50th game for the club! 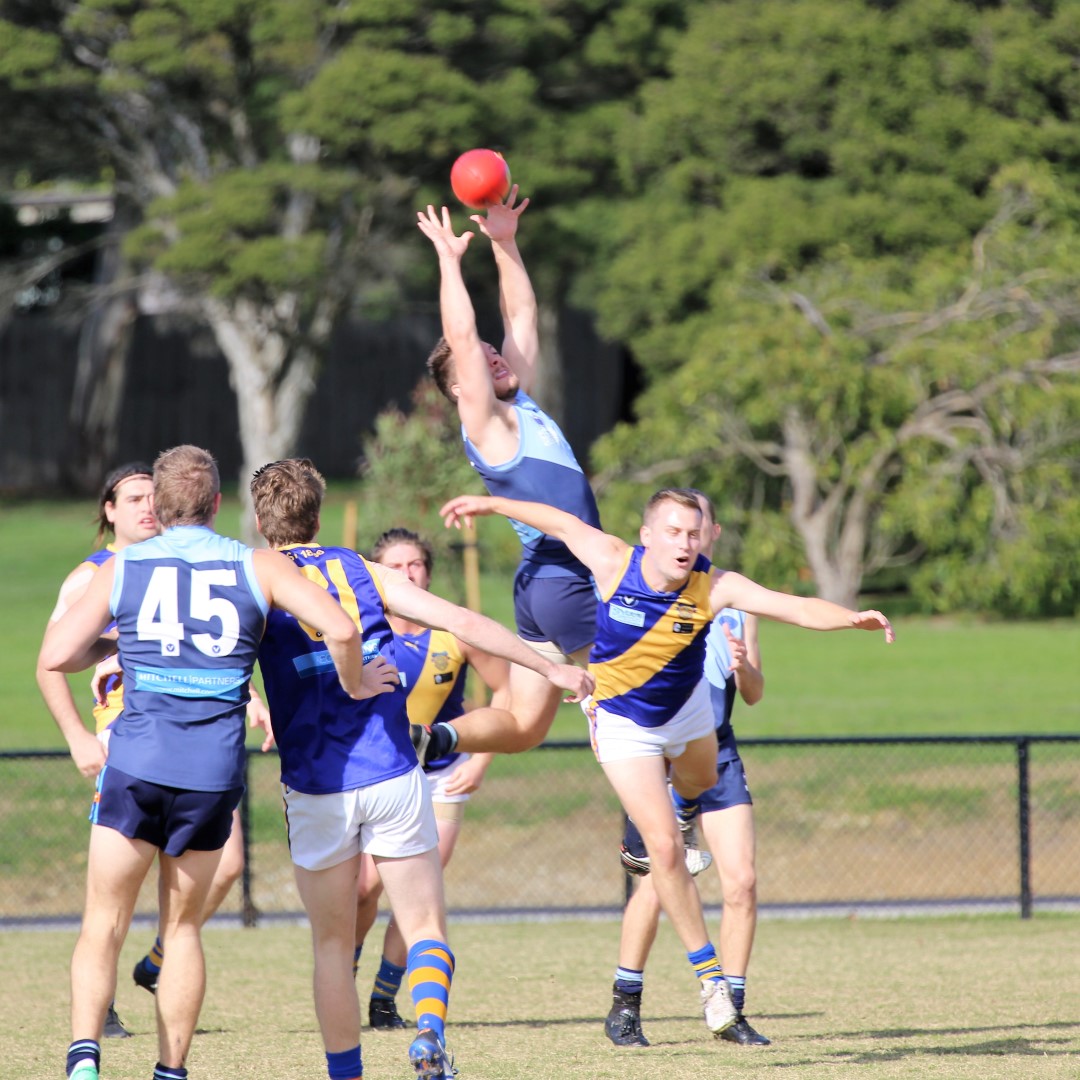 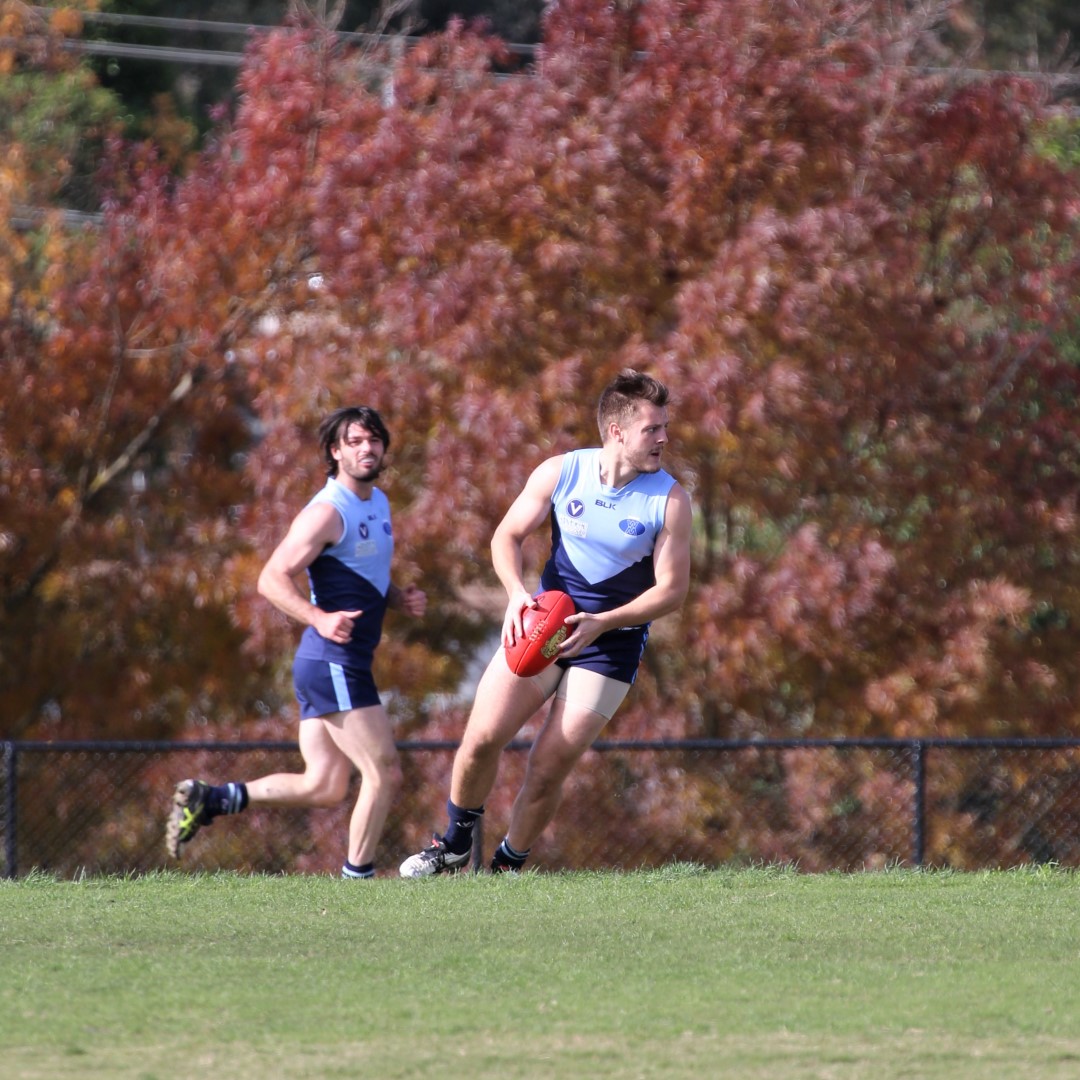 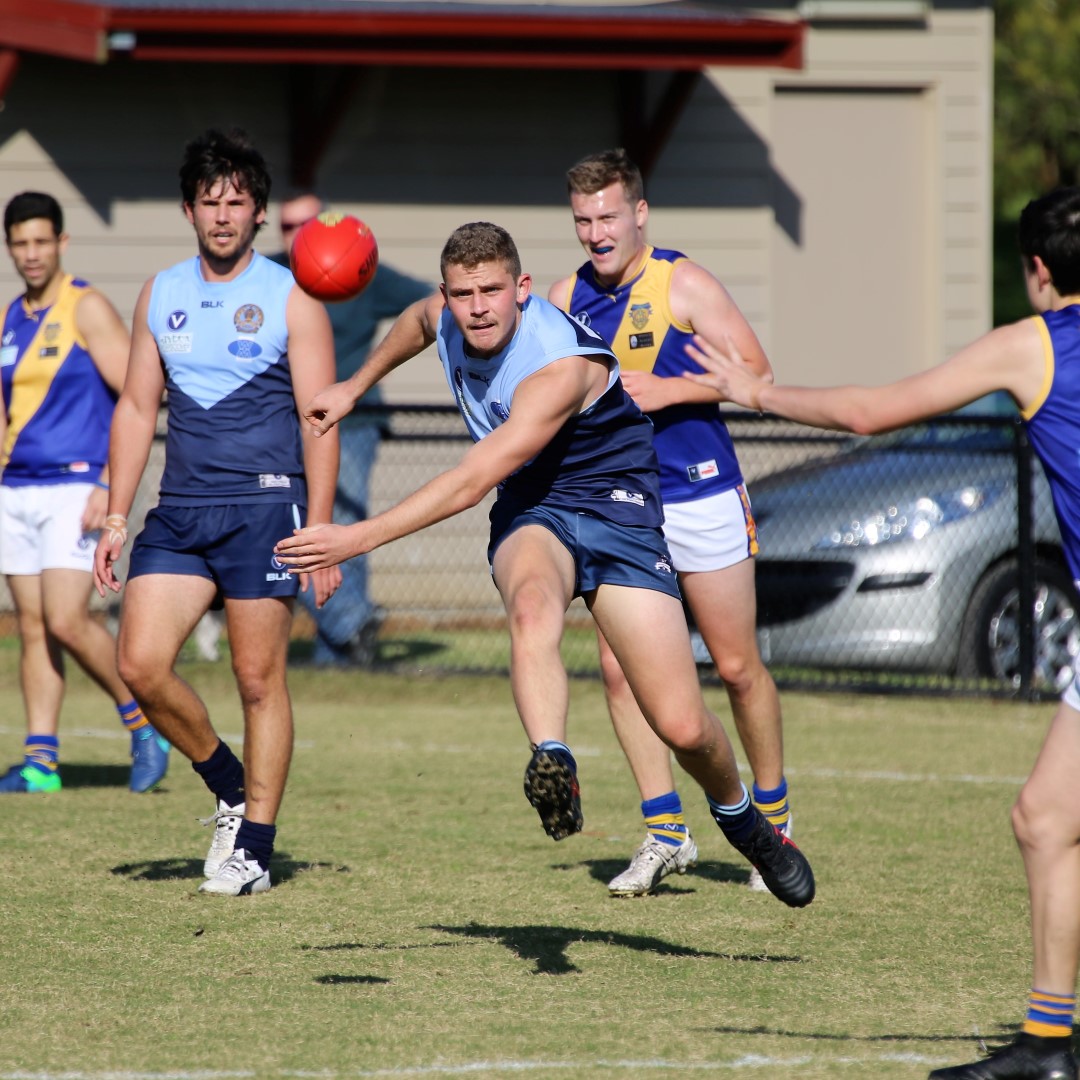 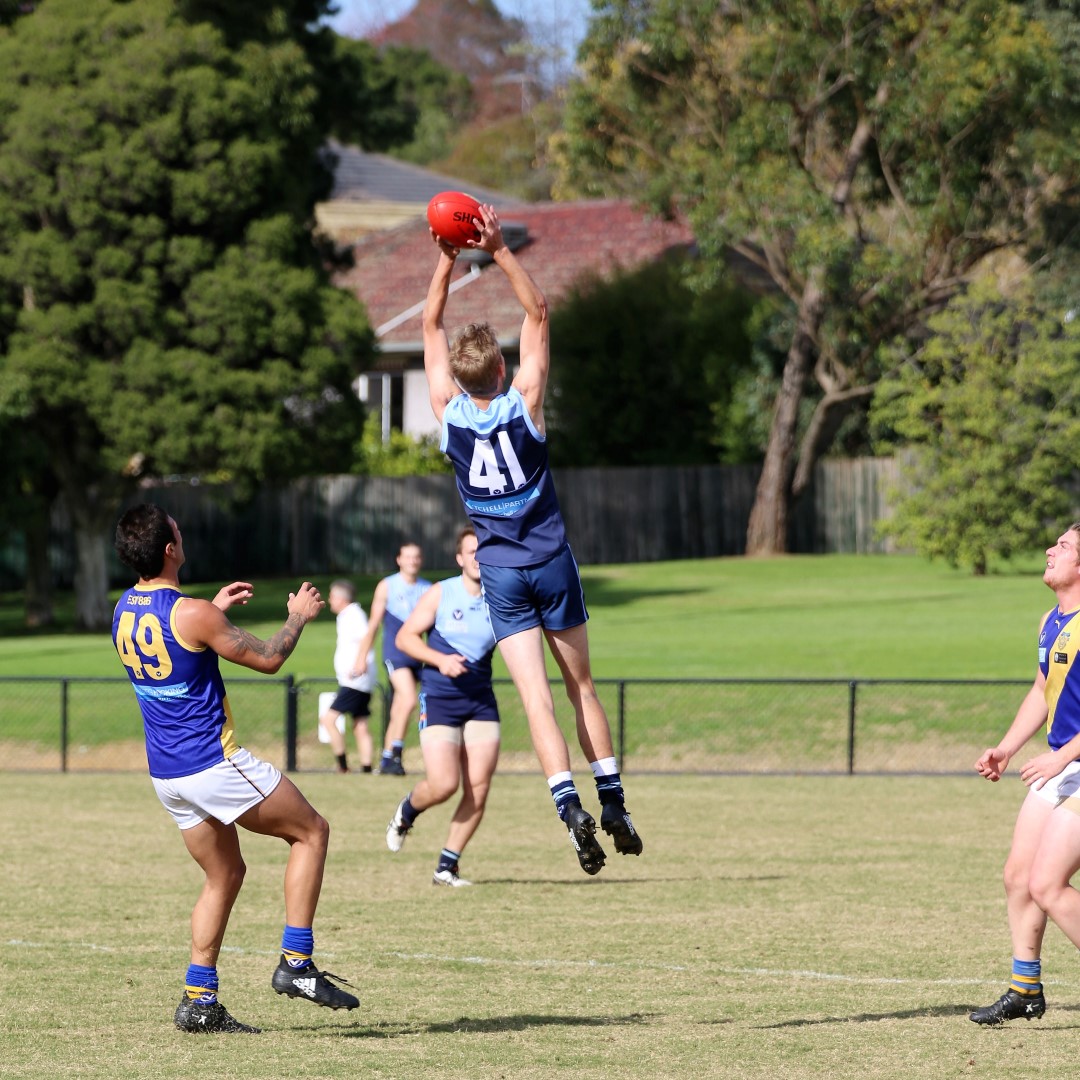 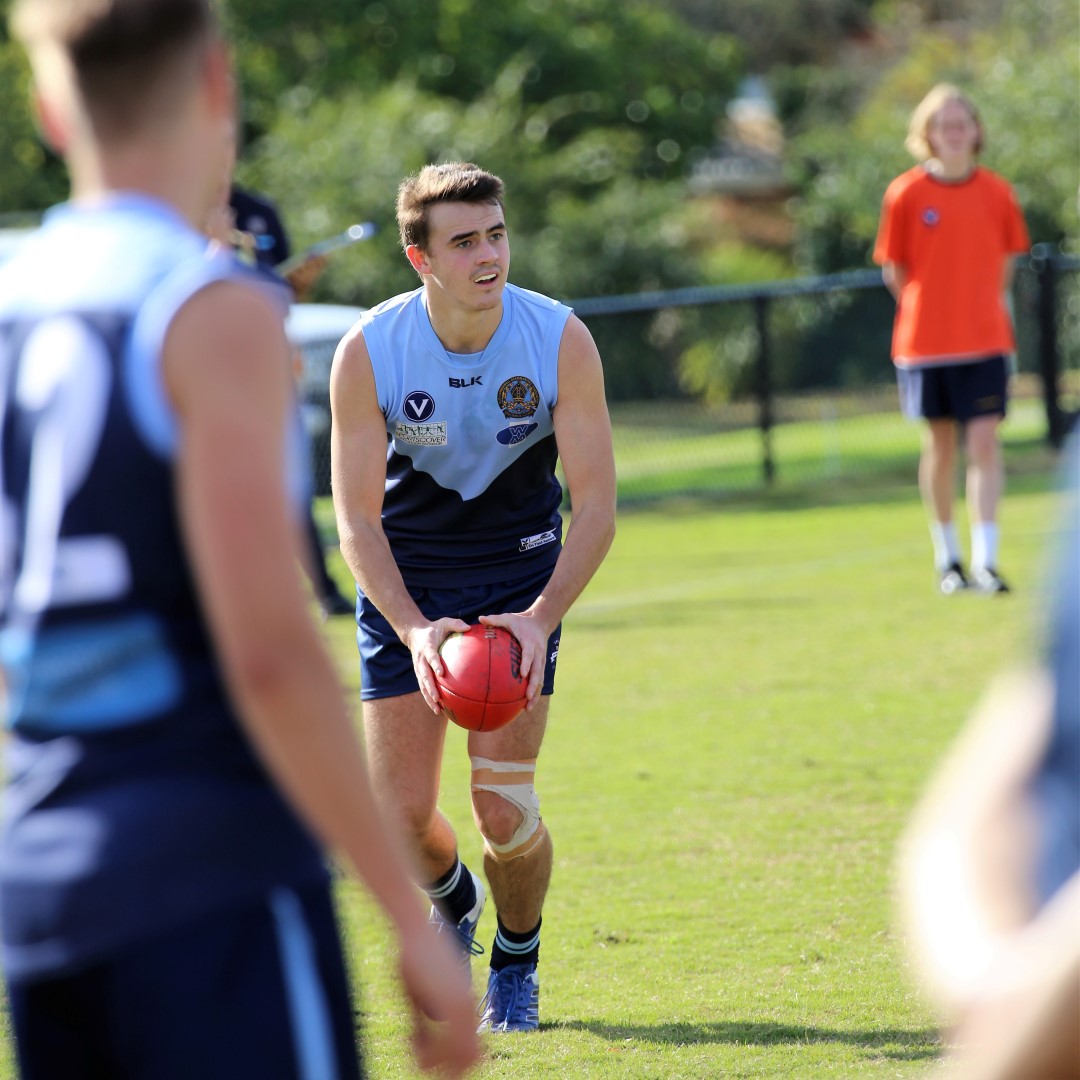 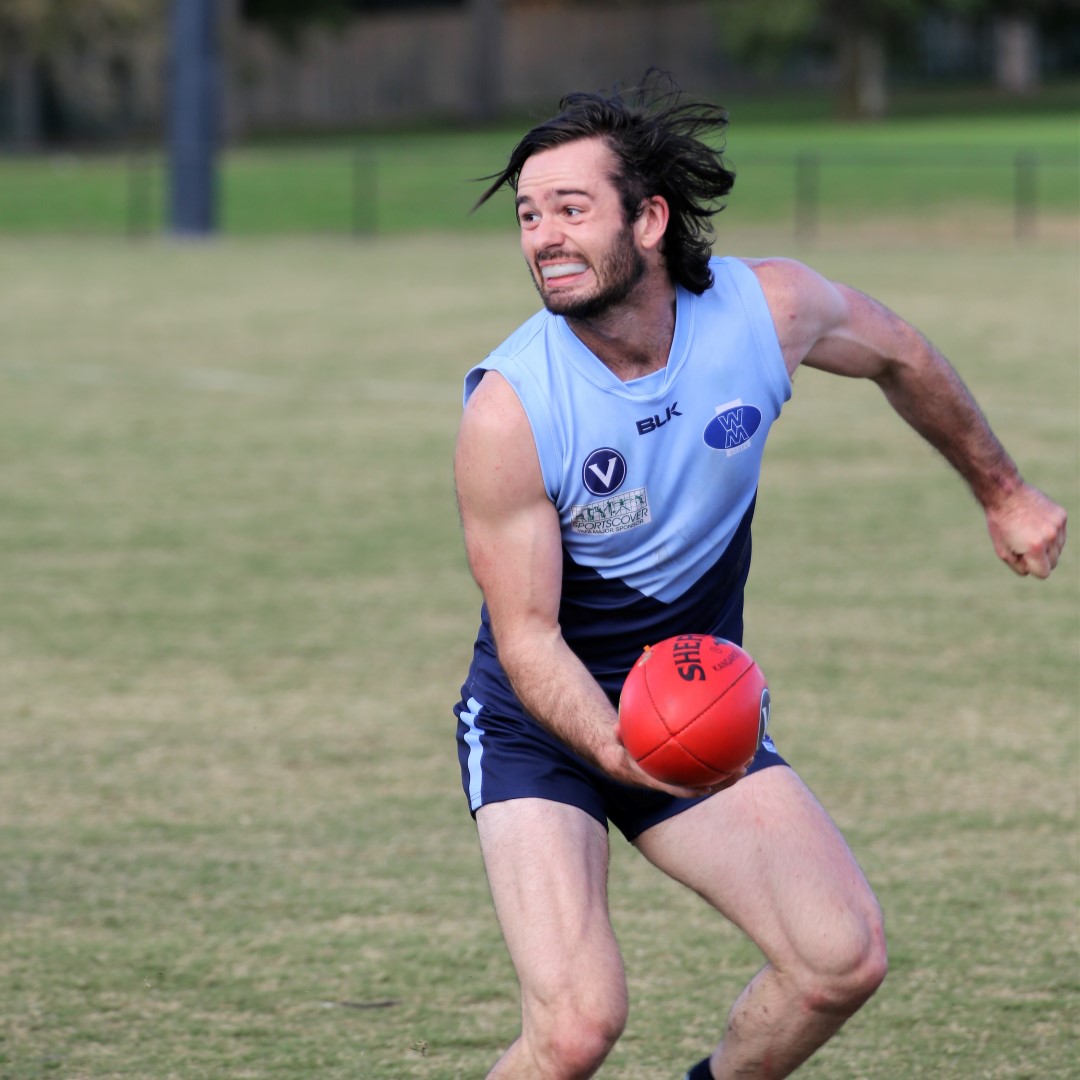 The Under 19’s once again faced a fellow top four side in St Bedes/Mentone Tigers on a sunny afternoon at GBO.

After a sluggish start the previous week the boys came out firing, kicking six goals to a solitary point in the first quarter. Mike Schumann was electric up forward, marking everything and kicking three majors.  Kallan Percy’s ruckwork allowed Josh Holding and Will Dalrymple to continually drive the ball forward, and Jono Elliott competed fiercely across half forward.

Kicking against the breeze in the second, our stout defence prevented the opposition from kicking a goal, while adding two ourselves.  Lucas Lewitt-Mendes, Harrison Lucas and Mitch Fletcher were outstanding down back, while Robbie West and Fraser Masciatelli provided plenty of grunt around the contests.  Mitch McPherson was proving to be a useful forward target and competed strongly in the ruck later in the quarter.

Holding an eight goal lead at half-time, the challenge was to maintain the momentum in the second half.  The boys started slowly, allowing St Bedes to kick the first two goals of the quarter.  Some good work by Will Dalrymple and Tim Allan settled the team.  Matt Appleyard got on top in the ruck and some sustained pressure saw Kasper Scheiber and Mitch McPherson add steadying goals.

The last quarter tapered out, with each side adding a solitary goal.  The quarter was highlighted by Jonathan Tan’s tackling and repeat efforts, and Fraser Masciatelli’s aggression at the contest.

Overall, a good team effort resulted in a comfortable 58 point win.  Importantly, our performance showed we can be competitive against any side in the competition if we bring effort and the right attitude. 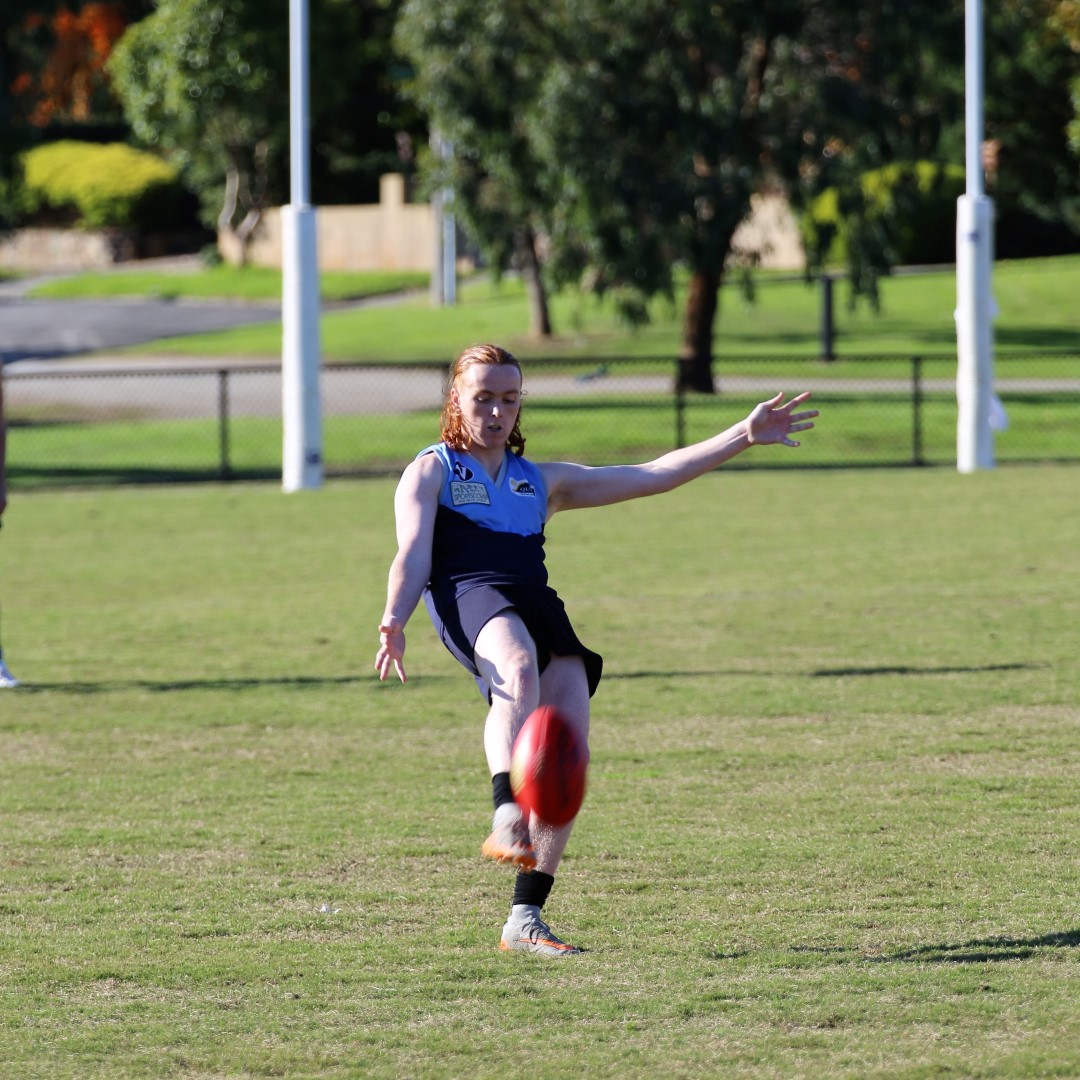 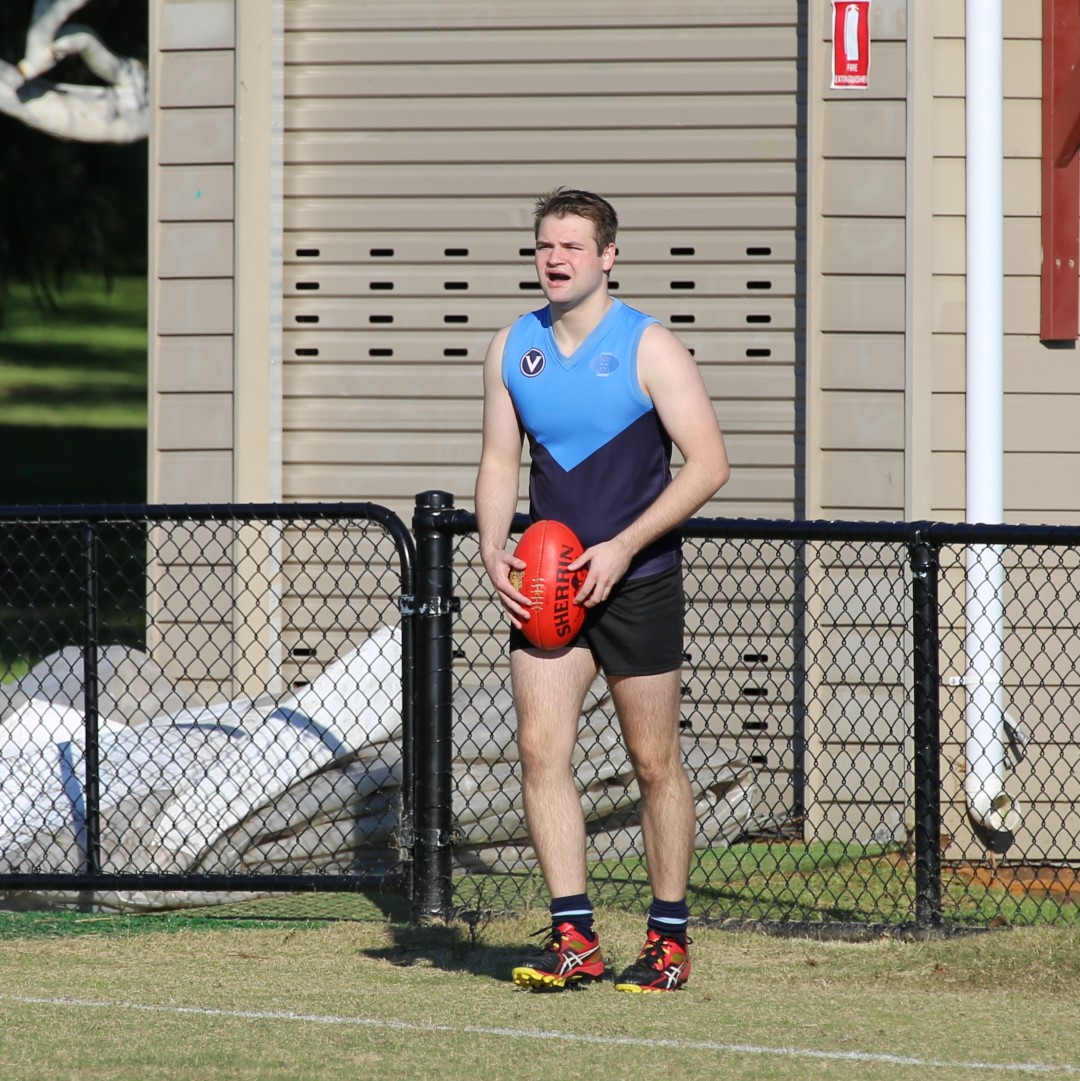 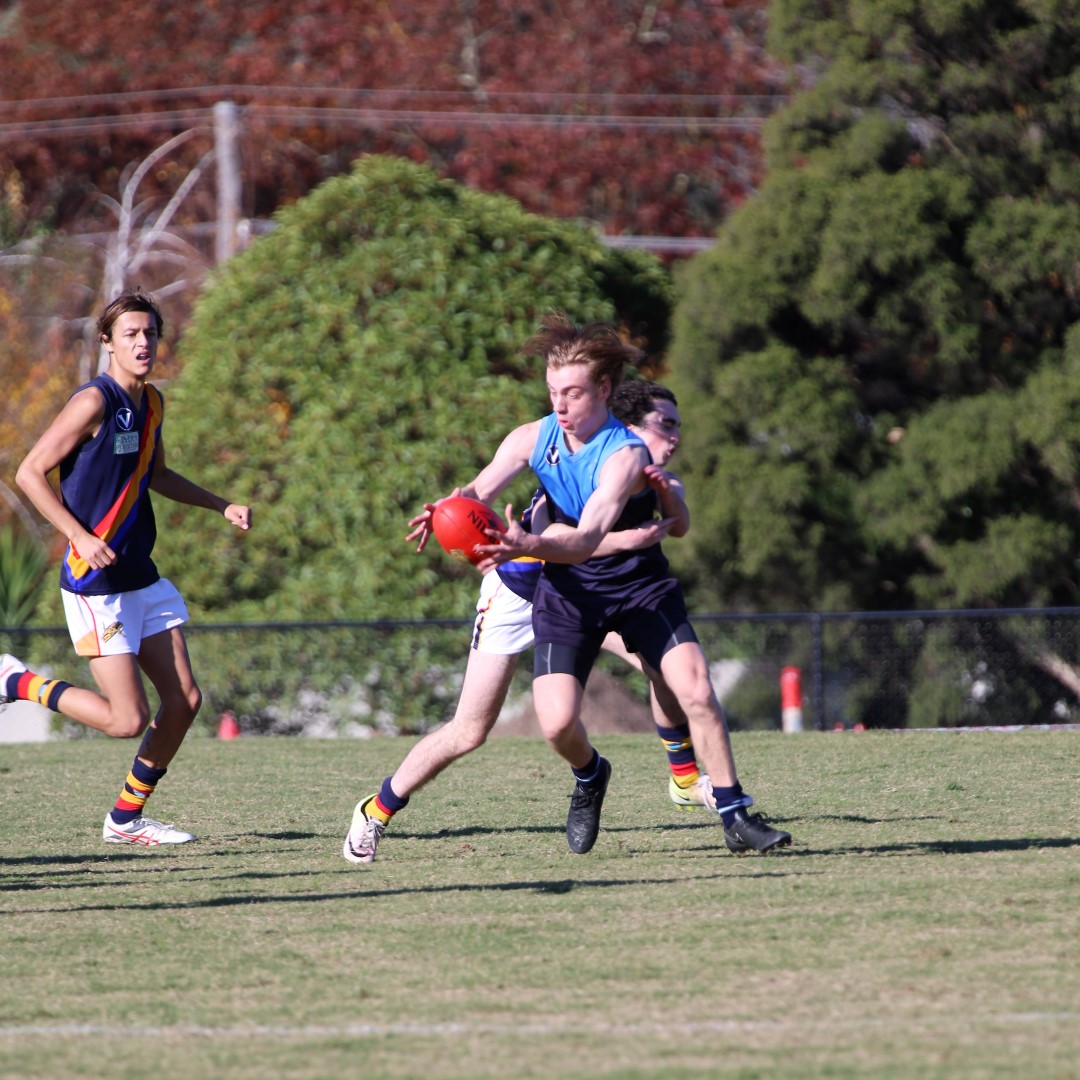 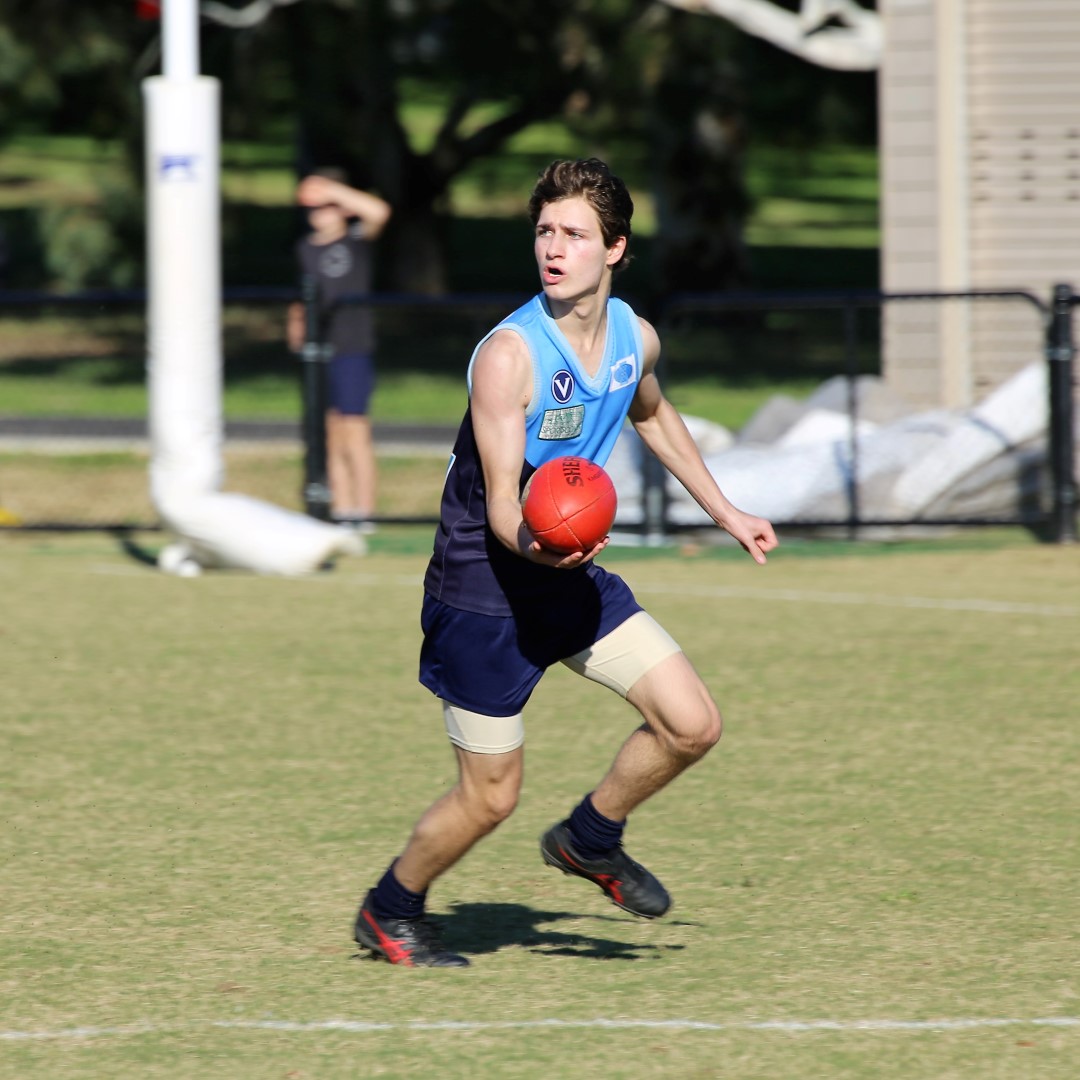 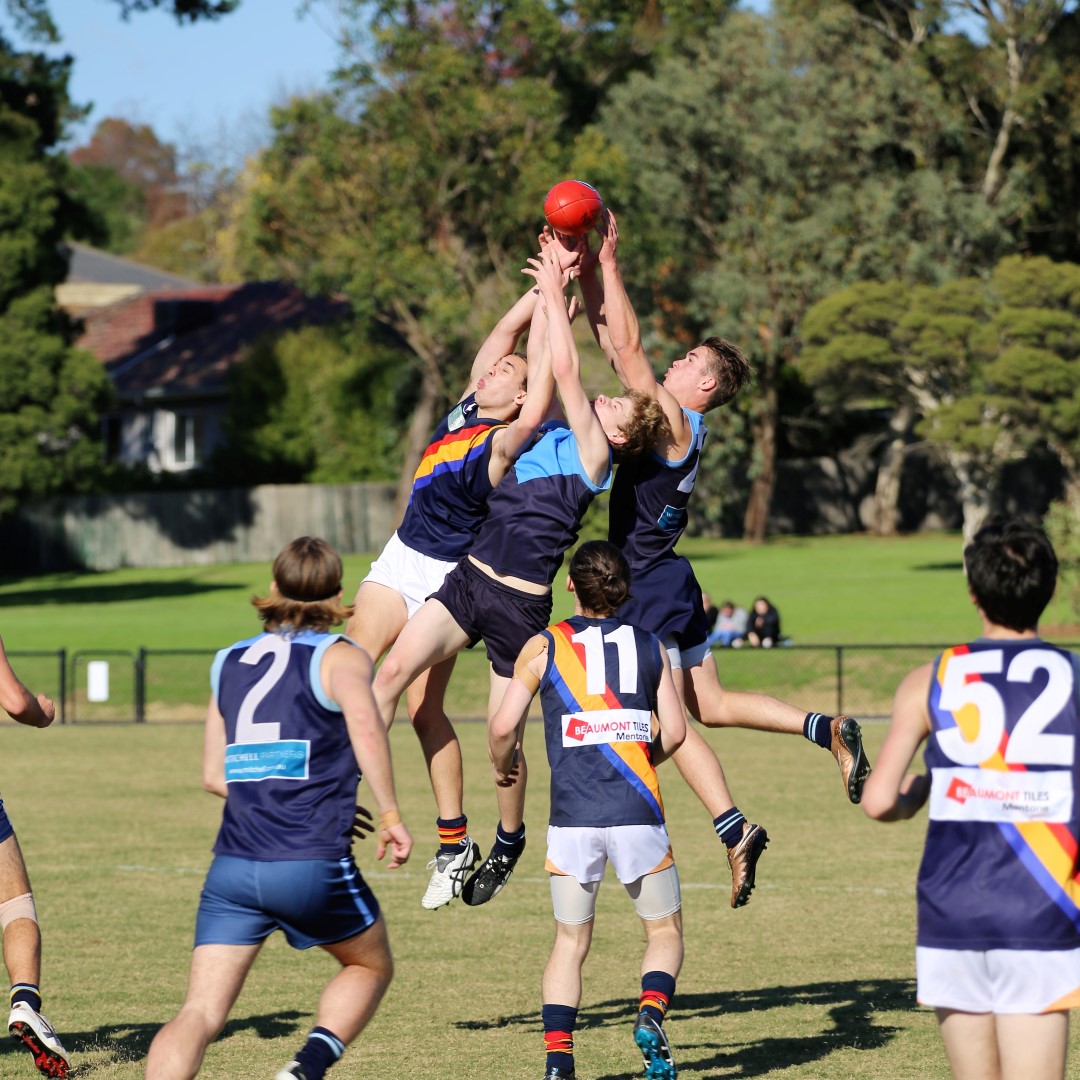 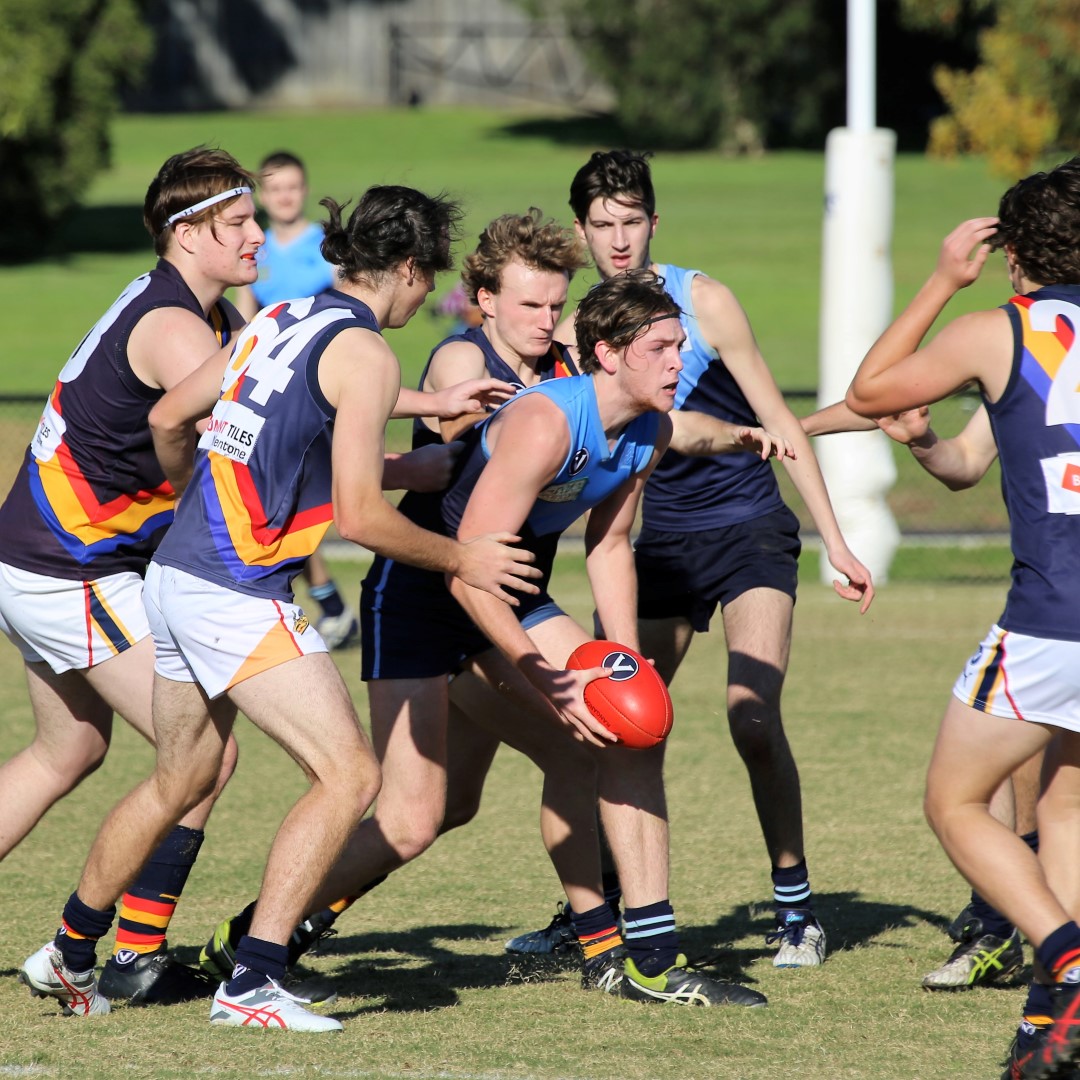